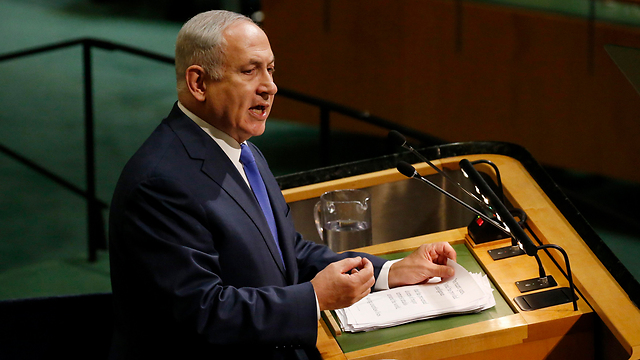 The strange case of Dr. Bibi and Mr. Netanyahu

Op-ed: Netanyahu's inspirational speech at the UN General Assembly reminded the world of Israel's successes and its accomplishments, but also made Israelis hope to see the same prime minister return to them, without reverting back to the petty and self-obsessed statesman we usually have in charge.

The most obvious thing in Netanyahu's speech at the UN General Assembly is the gap. The tremendous distance between the inspirational speech, the meetings with world leaders, the success as the most veteran statesman in the Western world and what goes on at home.

You do not have to be a reporter on Channel 20 to assess Netanyahu's abilities. He is probably the best speaker the State of Israel has ever raised. His messages represent most of the sane Israelis who believe in this country, his hands are raised in perfect timing, his gimmicks always work.

You do not have to be a leftist who belongs to the "Just not Bibi" camp to see what happens to him when he crosses the ocean and arrives at the Holy Land.

It's like we have two prime ministers. One does everything that is right and proper, succeeds in harnessing the president of the United States' unprecedented support and promoting public ties with the more moderate Arab states.

The second prime minister busies himself with his former superintendent, with the Prime Minister's Residence food expenditures and with his references in the media.

Netanyahu reminded the world yesterday of Israel's contribution and vicariously also reminded the Israelis on his successes as prime minister.

He was right when he spoke about UN hypocrisy and justice when he talked about Iran. He was right about every word he said, but as he left the podium he also left his righteousness.

Despite Netanyahu's skills, what can be remembered from yesterday is actually Trump's belligerent speech against North Korea. If there is a change in the world's nuclear balance, it is likely to come from the escalation around this speech.

Netanyahu and his wife Sara meet with US President Donald Trump at the UNGA
We find it difficult to say this out loud, but Iran is already a done deal. The Chinese and the Russians have been cooperating with it since Obama signed the agreement. Economic interests prevail over the desire of the Gulf States and Israel to see Iran restrained. Obama's strategic mistake cannot be corrected, the Chinese and the Russians will avoid this, in contrast to their attitude to North Korea, and it is doubtful whether this error can be changed as we demand. Obama's damage to the Middle East was not caused by the wing-flap of a butterfly.

And here is precisely Israel's biggest tragedy, despite Netanyahu's successful speeches at the United Nations (11 in total), and although he has succeeded in bringing Iran to the international agenda since the 1990s, ultimately the trend is the same. Iran is a nuclear threshold state that lives and breathes with and without sanctions.

Iran is the cause of international terrorism. Some of it is aimed at us, and yet the international community has no interest in being Israel's messengers. We have become prophets of the apocalypse, commentators as a substitute for active players with the potential for a military attack as it was during Netanyahu's second term.

We are indeed a light unto the nations in many areas but unfortunately it is not enough to change a strategic balance. A speech is just a speech. It is so when it's full of pettiness in front of party activists and It is so when it fills Israelis with national pride. We all deserve to have the Netanyahu who represented Israel at the United Nations. Experienced and statesmanlike. That would be enough of a practical outcome of the speech.