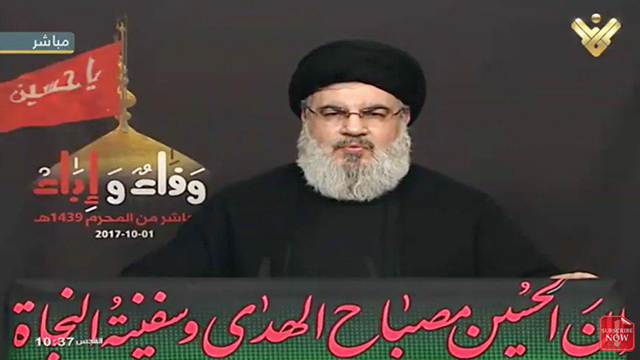 In speech marking Muslim holiday Ashura, Nasrallah says 'the resistance's fight is against the Zionists occupying Palestinian lands and not against Jews,' advising Jews to leave before the Netanyahu government 'takes you on an adventure that could prove to be the end' of Israel.

Hezbollah leader Hassan Nasrallah on Sunday called on Jewish people to leave Israel in the latest of his threatening speeches.

In a speech marking Muslim holiday Ashura, Nasrallah had "a clear message to all Israelis and Jews across the world—we, at the resistance, have said from the start that our fight is against the Zionists occupying Palestinian lands and not against Jews." "The Jews who came from all over the world must know they are adding fuel to the regional war," he added.

Nastallah giving Ashura day speech
He called on "all non-Zionist Jews (not to align) their considerations with the considerations of the Zionists, who are leading themselves to certain destruction. I call on all of those who came to occupied Palestine to leave it and return to the countries they came from. If the stupid Netanyahu government launches a war, they won't have time to leave Palestine and there will be no safe place in occupied Palestine. The enemy's government must know times have changed."

Nasrallah also had a message to Israelis, "You know much of what your political and military leaderships tell you about Israel's ability to win a future campaign are lies and delusions. You know the size of the faults and cracks there are. So don't allow a stupid and condescending leadership to take you on an adventure that could prove to be the end of this entity."

Ashura commemorations in Beirut
"This war would be at your expense and you would pay the price," he warned. Nasrallah further accused Israel of "sending threats to Lebanon," continuing its "aggression in Syria under the banner of preventing the resistance from obtaining new military capabilities," and "working to bring war to the region under any possible pretense." The Hezbollah leader asserted that "Netanyahu is pushing the region to war against Lebanon and Syria, but neither he nor his government and military command have a correct assessment of where this war might lead... they don't know how it would end. They don't know what's waiting for them."

Hezbollah held a parade in Dahieh, its stronghold in southern Beirut, with masses of Shiites upholding the customs of Ashura, when the Shiite Muslims commemorate the death of Husayn ibn Ali, the grandson of Muhammad at the Battle of Karbala in 680 CE.

In recent years, Nasrallah would come out of hiding for the Ashura holiday, but this year chose to stay in his bunker and his speech was screened to the masses in Dahieh.

Nasrallah also made a speech on the eve of Ashura on Saturday night, accusing Israel of planting "booby-trapped cameras" in south Lebanon and then detonating them when the alleged spy equipment was discovered.

He further accused Israel of the Kurdistan independence referendum.

"As we put an end to ISIS's plot, which was created by Israel, the region is once again preparing for a new division," he said. "After the failure of Israel's ISIS program, they returned to their plan to divide the region, starting from the Kurdistan-Iraq region."

Nasrallah warned the division would lead to internal wars in the region, and that "only Allah knows how long they will continue."