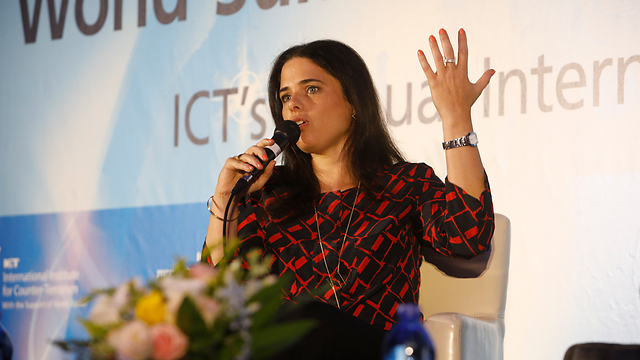 There’s no need for further politicization of the court

Op-ed: Someone in the government has got it all wrong. Public media isn't a mouthpiece for political announcements, and judicial authority shouldn’t have to participate in a clearly political gathering, even if it has been declared a ‘state event.’

We excel in self-examination, especially ahead of Yom Kippur. The problem is that we usually settle the score with others. We’re not the ones who are wrong, they are. The Right performs the Left’s self-examination, and the Left performs the Right’s. Each side remains loyal to its own camp. It’s always been like this, and remains so in the present. Even if we use a magnifying glass, we’ll find it difficult to see anyone in the public discourse expressing remorse. After all, the rivals are the only ones who sin. So allow me to express remorse. Several weeks ago, I attributed a statement that there’s a contradiction between Zionism and human rights to Justice Minister Ayelet Shaked. That’s what the headlines said. The condemnation articles followed, mine included. Later on, I went back to the full speech, and as it turns out, no such statement was made in it. It was mostly commentary.

Justice Minister Ayelet Shaked (Photo: Shaul Golan)
I sinned again two weeks ago, when I wrote that New Israel Fund President Dalia Sasson had tweeted that Israel is “an evil country.” I was accurate. But sometimes one can write facts and still create the wrong impression. Because Sasson’s comment was written in haste. It was an impulsive response. She took it back. Her stance towards Israel is more painful than hostile. It was a slip of the tongue, nothing more. The national self-examination should remind us that the distribution of opinions in a healthy society is similar to the Gaussian curve, which looks like a bell, getting smaller and smaller at each end, and a lot larger as you approach the center. But that’s changing. The center is growing weaker. The ends are growing stronger. This characterizes many democracies. Last week, we received another illustration of this phenomenon, in Germany. A party that isn’t neo-Nazi, but has neo-Nazi characteristics, got 13 percent of the votes. Social networks emphasize the ends. This infiltrates the public discourse and politics. It affects election results. It began before US President Donald Trump, though Trump turned it into an art. The facts don’t matter. Neither do the negative headlines he receives. The art is to keep making headlines. Social media changed the rules of the game, leading to a deterioration in both the discourse and democracy. There is no method to stopping this process on the horizon, and we have no idea how it will end. And that’s a cause for concern.

The 50th anniversary of the Jewish settlement in Judea and Samaria was marked in a state event last week. Supreme Court Chief Justice Miriam Naor decided not to send a representative, though there is a custom—albeit not a completely binding one—of sending a representative from among the country’s top officials to state events. Both the Israel Public Broadcasting Authority and Army Radio refused to air a governmental commercial advertising the event. Naturally, the frustration in the Right reached new heights. They have been in power for decades, but there are two authorities they don’t control—the public media and the judiciary system. The thing is that someone in the government has got it all wrong. The public media is not a mouthpiece for political announcements, and the judicial authority shouldn’t have to participate in a clearly political gathering, even if it has been declared a “state event.” After all, there isn’t a more controversial issue than turning Israel into a binational state by expanding the settlement enterprise. And this enterprise, in any event, is a matter for self-examination.

Prime Minister Benjamin Netanyahu at the event marking 50 years of Jewish settlement in the West Bank, one of the greatest troubles of the Zionist enterprise (Photo: Mizmor Hafakot)
The Jews’ right of return, right into the center of the Palestinian population and beyond Israel’s borders, is one of the greatest troubles of the Zionist enterprise. The Zionist vision has materialized. We have a state. We have a Jewish majority. The settlement blocs were established primarily by the Labor Movement. But the blocs swelled up, many outposts have been added, and even if the separation is still possible, so that the state will remain Jewish rather than binational, the event’s organizers favor binationality over Jewishness. They have a majority in the coalition. They don’t have a majority among the people. The last survey on the issue, conducted by the Institute for National Security Studies (INSS), found that 69 percent are in favor of the evacuation of communities outside the blocs. This is a view shared by one-third of Likud voters. Only 21 percent support the settlement in a way that is acceptable by the event’s organizers. And this is the place right-wing speakers are trying to drag the Supreme Court, to the minority’s controversial stance.

The Right is correct in its arguments about judicial activism, which includes a politicization of the court to the left. But there is no need to drag the court to further politicization, just because it comes from the right side.

And then came Miri Regev

Culture Minister Miri Regev did “Foxtrot” a favor. It’s unclear how many people will watch the movie, but it is clear that a significant percentage of them will do it thanks to her. And no, it’s not an anti-Israel film, even if it does deal—in a slightly exhausting manner—with memory, with the Holocaust, with bereavement and with the recesses of its main characters’ minds. And most importantly, it wasn’t meant to be a successful film. Until Regev came along.

In the most talked about scene, there is more humanity than anti-Israel sentiments. At least that was my impression the first time I watched it. A vehicle carrying four young Palestinians arrives at a roadblock. The soldier even flirts, with his eyes, with a good-looking Palestinian woman. The security check is completed and they are permitted to move on. The door of the car closes on the edges of the young woman’s dress, which requires her to reopen it. At that moment, a can roll out of the car. A misidentification causes one of the soldiers to yell “grenade,” and a barrage of gunshots kills the young Palestinians. A tragedy of errors.

Will the bulldozer scene from ‘Foxtrot’ remain in our collective memory? Possibly, and we have Miri Regev to thank for that (Photo: Giora Bejah)

At a time when checkpoints still attract terrorism, as we saw in Har Adar last week, and as tensions soar, these kinds of mistakes can happen. They don’t usually happen. It’s a rare incident. But films don’t pretend to reflect a reality.

In the following controversial scene, a senior commander sends a bulldozer to bury the vehicle along with its dead in a deep pit, to conceal any trace of the incident. Critics of the famous kind asserted that reality is worse than the film. The film provided them with what they already had in their minds. For years, there have been more Machsom Watch women and cameras at the crossings than soldiers, but the delusional critics insist on proving that Regev, who saw it as anti-Israel propaganda, is right.

This isn’t an anti-Israel scene, I argued in a conversation with Dr. Yvonne Kozlovsky Golan, head of the MA program for Culture and Film Studies at Haifa University, but mostly a delusional scene. You’re wrong, she scolded me. The bulldozer scene, she explained, corresponds with a famous scene from Bergen-Belsen, in which British army bulldozers bury countless bodies in a huge pit that turns into a mass grave. None of the people I discussed the film with detected the hint, but she may be right. The film, she explained, is filled with flashbacks to the Holocaust. And at the end of the day, this is the scene that will remain in our collective memory. There are studies about history, films, memory and consciousness. Our first impression isn’t necessarily what remains later on.

There are more young people who are familiar with the Holocaust from Roberto Benigni’s “Life is Beautiful” than young people who have read books about the Holocaust. And Americans are mostly familiar with the Vietnam War from films like “Platoon” or “Born on the Fourth of July.” These films didn’t pretend to reflect a reality. We don’t know about American soldiers playing Russian roulette in Vietnam, but that’s the impression that was left by “The Deer Hunter.” Will the bulldozer scene be the impression left by “Foxtrot”? It’s possible. And we have Miri Regev to thank for that, too.