Fatah and Hamas representatives in a preliminary meeting before visiting Gaza 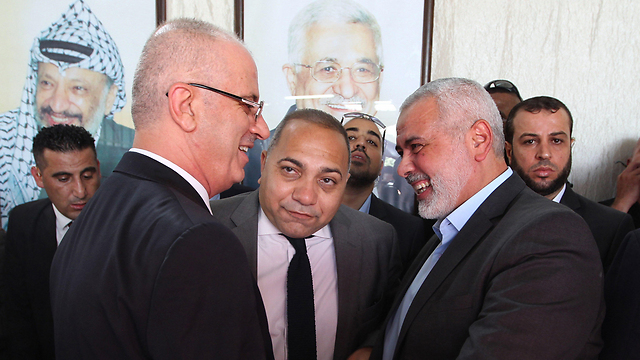 A reconciliation no one really wants

Analysis: With Abbas refusing to give up his demand to dismantle Hamas’ military wing, and Hamas suspecting the Egyptian middleman is only pushing for reconciliation to prevent more terrorist infiltrations to Sinai, none of the involved parties truly seem to have a real interest in uniting the Palestinian camp. And if such an agreement is actually reached, it might entail an unpleasant surprise for Israel.

It’s no secret that a cartoon in the Arab media is worth at least 10 opinion articles and more than 5,000 words. Since the Arab Spring, cartoonists have developed ways of getting around censorship, and as a result, their work is rarely rejected or tossed in the trash.

Those who begin their mornings with the excellent writers of the Al-Hayat newspaper, for example, or by browsing through Al-Jazeera’s news website, are familiar with the recommendation to look for the cartoon before anything else, in a bid to understand the real state of mind in our neighborhood.

Umiya Juha is the first female cartoonist (and the only woman) in the Arab media and has won many awards. She was born and lives in a refugee camp in Gaza, has been widowed twice (his first husband was assassinated, and the second one was wounded in a “work accident” and Israel prevented him from leaving the strip for medical care). Juha, whose signature is the key symbol of the right of return, provides an interpretation of the reconciliation efforts in the Palestinian camp through a daily cartoon published both in the West Bank and in Gaza, and she finds it important to present a variety of voices.

After snidely mocking the “historical” hug the prime minister of Ramallah, “the government worker,” gave the Hamas leader, who is depicted as a baby—a sort of moderate version of Hamas, which was allegedly born as a result of the “reconciliation rape” forced on Palestinian President Mahmoud Abbas—Juha insists on shattering illusions: She draws a pious bride, according to tradition, complete with full head covering. When the excited groom arrives to remove the sealed veil, he is shocked to find out he was sold defective goods: the alarmingly ugly bride reveals threatening features and sharp, dangerous teeth. And if that were not enough, she doesn’t hesitate to pull out a weapon “for self-defense” on the wedding night.

The Fatah delegation is expected to leave Tuesday for the intelligence headquarters in Cairo, where it will sit down and do the dirty work with the Hamas delegation. The delegation from Ramallah includes some well-known figures: Jibril Rajoub, Azzam al-Ahmad and Rauhi Fatuh. On Saturday, it was revealed that Hamas is insisting on bringing Sleh al-Arouri, whose name has been linked with a series of terror attacks in the West Bank and with Israelis' abductions. I believe there’s no need to explain who the dangerous bride is. The responsibility is now in the hands of General Khaled Fawzy, the Egyptian intelligence chief. He’s the one who will run from one room to the other, looking for different formulas to ensure the reconciliation won’t collapse.

Hamas leader in Gaza, Yahya Sanwar. There’s no way he’ll touch the 40,000 members of Hamas’ military wing and the Islamic Jihad gunmen
The truth is that none of the involved parties has a real interest in uniting the Palestinian camp. Abbas is no fool, and he’s sending his delegation with an unequivocal order not to give up on the collection of weapons in Gaza, “because I won’t accept a Hezbollah model.” The Hamas side suspects the Egyptian middleman is only pushing for a reconciliation to prevent terrorist infiltrations and arms smuggling into Sinai. It’s no coincidence that the Hamas speakers have announced the organization is drawing closer to Iran. It’s the strongest hint that there’s another option that the weapon suppliers in Iran are not being caught off guard. While Yahya Sanwar, Hamas’ new secretary-general in Gaza, has sworn to break the neck of anyone who disrupts the reconciliation, there’s no way he’ll oversee the collection of weapons and touch the 40,000 members of Hamas’ military wing and the Islamic Jihad gunmen. Egyptian President Abdel Fattah el-Sisi and his intelligence chief are preparing to curb collapse scenarios. Israel may be in for a very unpleasant surprise if the Egyptian intelligence chief succeeds in reaching a reconciliation agreement. But how involved is Israel and how deep will be the updates arriving from Cairo? Here’s another skeptic cartoon created by Umiya Juha: Al-Sisi and Prime Minister Benjamin Netanyahu sit on one branch of a tree, sort of entertaining themselves, until the Egyptian president cuts off the branch under Netanyahu and they both fall into an abyss. The reconciled Abbas and Sanwar sit on the opposite branch, and the Hamas secretary-general cuts off the branch in a bid to bring down Abbas. This foursome lands on the heads of two million miserable, unemployed Palestinians, who can’t find a shred of hope either.