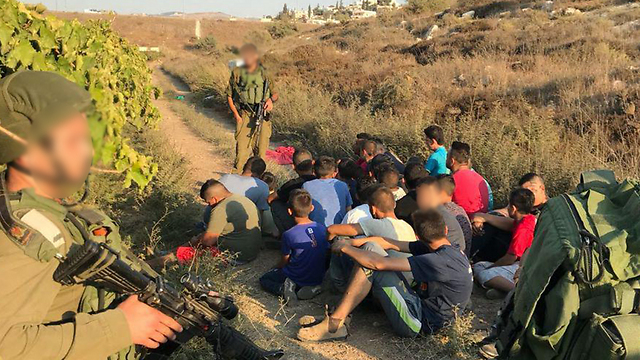 Twenty residents of the Palestinian town of Beit Awwa were indicted Sunday after they were caught last week perpetrating the largest heist in recent history, stealing tens of tons of agricultural produce.

The defendants were charged with illegally entering Israel, trespassing, malicious damage of property and theft under aggravated circumstances. The suspects allegedly caused damage estimated at NIS 300,000 to the vineyards and tomato gardens of the Israeli farmers.

According to the indictment, the defendants entered Israel illegally on October 20 and 21 along with many others—including minors and women—through the water passage under the West Bank separation wall.

They crossed the demilitarized zone and entered the vineyards and greenhouses of Moshav Shekef, equipped with baskets, crates and other equipment, and began stealing tomatoes and grapes in order to later sell them in the Palestinian Authority. The defendants damaged the grapevines and their branches, cut through insect nets, cut into the walls of greenhouses, destroyed equipment on which the vines were assembled, and consequently damaged future grape and tomato crops.
Suspects caught mid-theft    (צילום: דוברות המשטרה)
X

A civilian traveling on a nearby road noticed them and alerted the IDF, who arrived to the scene shortly thereafter. Some of the alleged thieves abandoned the merchandise and fled back to the Palestinian Authority, while others hid in the greenhouses and vineyards but were eventually spotted by IDF and Border Police forces.

IDF troops also seized a small part of the produce in Israel and in the PA, including some off vehicles in the PA onto which the defendants loaded the merchandise. 67 Palestinians, including 40 children and teenagers, were arrested in connection to the theft.

Some of the produce suspects allegedly intended to steal

The Southern District Attorney's Office filed a request to keep the defendants in custody until the conclusion of the legal proceedings against them.

"The actions of the respondents, who spent hours in Israel in broad daylight, stole agricultural produce worth hundreds of thousands of shekels and caused a lot of damage—with the help of minors and women—are a testament to their insolence, and raises the fear similar acts would be perpetrated," the District Attorney's Office said in the request. "They were organized, planned their actions and worked systematically."