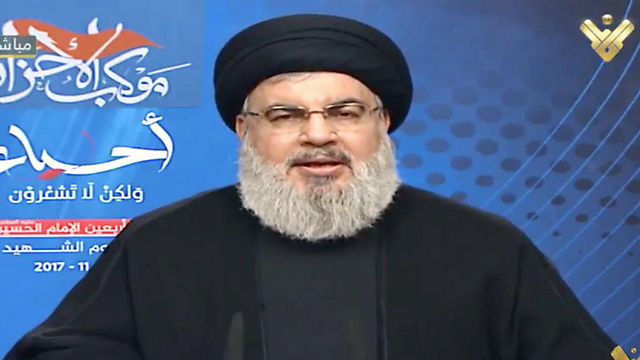 Hezbollah reportedly on high alert, primarily due to Israeli threats

Kuwaiti daily Al Rai reports that terror group Hezbollah has raised its alert level in all of Lebanon for fear that Israel will start a war, though it continues to officially maintain that Israel will not do so; 'Hezbullah ordered the arms shipments to Iran from Syria to be stopped because it has enough weapons,' reports paper; group also reported to heavily fear political assassination.

The Kuwaiti daily newspaper Al Rai reported on Saturday that Lebanon-based terror group Hezbullah has raised its level of alert throughout Lebanon to a record level due to threats from several countries, first among them being Israel. According to the report, the alert level was raised more than two days ago.

Al Rai reported that Hezbollah forces have been instructed to maintain high alert, despite the organization's assessment that Israel would not launch a war against it in the near or distant future.

The sources told the newspaper that they were expecting an assassination attempt of a well-known political figure in Lebanon, similar to the assassination of former prime minister Rafik al-Hariri in February, 2005. "This would be an attempt to reshuffle the Lebanese arena and embarrass Lebanese President Michel Aoun," the source said.

Recently resigen Lebanese Prime Minister Saad al-Hariri—Rakik al-Hariri's son—said in his statement of resignation two weeks ago that he had learned of a plot to assassinate him as they had murdered his father. In the past, it was repeatedly argued that Hezbollah and the Syrian regime were behind the senior Hariri's assassination.

The report also said that Hezbollah had instructed its men not to transfer to Lebanon the weapons being sent from Iran via Syria. This directive allegedly stems from two reasons: first, Hezbollah needs accurate and long-range missiles not in Lebanon but in Syria, where it is currently assistsing the Assad regime in its war against the rebels; and second, Hezbollah has a surplus in its Lebanon arms warehouses, making it hard for it to stash anymore weapons there.

According to the report, Hezbullah already has enough weapons to assure it a great deal of firepower in any future war and for a very long period of time.

Over the past three years, dozens of attacks on Syrian territory have been attributed to Israel, ostensibly aimed at thwarting the smuggling of advanced weapons from Iran to Hezbollah.

In a speech last Friday, Hezbollah Secretary General Hassan Nasrallah said that Saudi Arabia had declared war on Lebanon and  that the Saudis were trying to get Israel to attack Lebanon.

"Saudi Arabia is inciting Israel to launch a war against Lebanon. I speak here about facts, not analysis. Saudi Arabia is ready to pay tens of billions of dollars to Israel for that," Nasrallah alleged.

The Hezbollah leader tried to reassure the Lebanese by saying that while they should be ready for war, it is unlikely that it will indeed break out, because Israel knows that the price of such a move would be heavy.

In order to make the purported Israeli-Saudi relationship clearer, Nasrallah noted the Jerusalem Ministry of Foreign Affairs' instruction to Israeli embassies around the world to profess their support for the Saudi efforts against Hezbollah, as well as what he dubbed the "Israeli assistance" given to Syrian rebels and Al-Nusra Front, a Syrian terrorist organization linked to al-Qaeda.

"Israel is trying to incite a civil war," Nasrallah claimed, before warning Israel not to make any miscalculations in trying to take advantage of the situation in Lebanon. "Israel must not think we're afraid or confused. We're stronger than ever today.