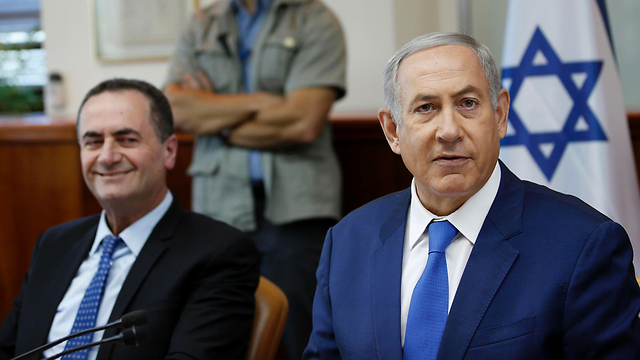 Netanyahu's minister who plans to succeed him

Intelligence and Transportation Minister Yisrael Katz says he would like to see Netanyahu continue serving as prime minister, but he is waiting in the wings to fill his shoes; 'I'm planning to be after him, leader of Likud and prime minister of Israel.'

Israel's Intelligence and Transportation minister Yisrael Katz said Thursday he plans to succeed Prime Minister Benjamin Netanyahu who is embroiled in corruption scandals and a police investigation. Despite his long-term pland, Katz said he hopes Netanyahu will be able to continue as prime minister, and "that the clouds that are hanging over his head now will pass." Israeli police have questioned Netanyahu six times over a pair of corruption scandals and one of his closest former aides has become a witness against him. Netanyahu has repeatedly denied any wrongdoing and called the accusations a witch hunt orchestrated by a hostile media.

Minister Yisrael Katz and PM Netanyahu (Photo: AFP)
Police say they suspect Netanyahu of being involved in bribery, fraud and breach of trust. The scandals have yet to threaten his rule but have chipped away at his public approval ratings.

"I trust the law enforcement," said Katz, an ally of Netanyahu. "Israel has a system and I hope that it will finish soon and that Netanyahu will have the possibility to continue to do the very important things that he is doing.

"I'm planning to be after him, leader of the Likud (party) and prime minister of Israel," he said. In the wide-ranging interview, Katz talked about President Donald Trump's campaign promise to move the US Embassy in Israel from Tel Aviv to Jerusalem. "It's an American decision," he said, but quickly added, "it's time that United States will recognize Jerusalem, the eternal capital of the Jewish people since 3,000 years as the capital of the state of Israel ... and after that to move the embassy."

Katz said Trump has to keep his promise.

On Thursday, it was reported that Trump is planning to announce in the coming days that the United States recognizes Jerusalem as the capital of Israel, and is giving serious thought on how to fulfil his election campaign pledge to move the US Embassy from Tel Aviv to Jerusalem.

Despite Thursday's reports, however, US officials said Thursday the president is poised to again delay a move.

Rumors of Trump’s planned announcement were met with warnings from Jordan's King Abdullah II, who said during a visit to the US that "the transfer of the American embassy to Jerusalem at this stage will have repercussions in the Palestinian, Arab and Islamic scene."

But Katz exprssed doubts that the move would inflame the reigion or the Palestinians.

"What will they do? It's not against peace negotiations," he said. "It's for the historic right." Katz came to New York from Washington where he said he met with Trump's special Mideast envoy Jason Greenblatt, who is a key player in the administration's effort to get an Israeli-Palestinian peace deal and end decades of conflict. "I pray that President Trump will succeed to bring the peace," the minister said. He said Israel would like negotiations with the Palestinians without any preconditions that can include Arab countries in the region. He singled out Saudi Arabia's Crown Prince Mohammed bin Salman. "I think Mohammed bin Salman now has the chance to do what Anwar Sadat did before 40 years—to take the decisions for him, and also for the Palestinians," Katz said. "I don't think the Palestinians are strong enough to take the decision—historic decision to accept the existing situation." He was referring to Sadat's negotiations with Israel after Egyptian forces surprised Israel in the 1973 Yom Kippur war that culminated in the Egypt-Israel Peace Treaty. "We are for trying to get the peace," Katz said, and the Trump administration is "trying to be creative." He said that with Saudi Arabia and other countries, the US is talking "and we are talking, and they are talking about regional process and regional normalization."

(Photo: EPA)
Katz said Israel's security is paramount in any peace agreement and he raised the issue of "terminology"—"if you call it an independent state or you call it autonomy." The Palestinians already have limited autonomy and have repeatedly said any peace deal must culminate with an independent state. At the United Nations, Katz said, Israel is campaigning to enforce the UN resolution that ended the 2006 war between Israel and the Lebanese militant group Hezbollah. It calls for Hezbollah and all other terror organizations and militias operating in Lebanon to be disarmed and demobilized—something that has not happened. Katz said Israel wants the US to enforce the resolution and "take very paralyzing sanctions on Hezbollah" to keep Iran from supplying weapons and money to the military group and to warn Iran "to stop what they are doing."

He said there should be UN sanctions "but the power will have to come from the United States and other countries."

Ynet writers contributed to this report.