Quds Force officials in charge of the smuggling operation 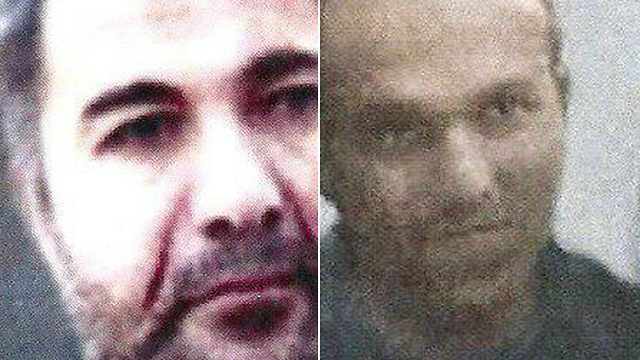 The Intelli Times blog reported Friday that contrary to their public statements, Iranian involvement and aid given to Houthi rebels in Yemen runs far deeper than the Islamic republic admitted, with reports of an armament smuggling operation from Yemen to the Gaza terrorist organizations being underway.

Shahlai (L) and Abu Abdullah, tasked by Quds Force to direct smuggling of weapons to Gaza
Intelli Times refuted this assertion, however, unveiling the Revolutionary Guards' Maj.-Gen. Qasem Soleimani-commanded Quds Force operative responsible for the Yemen theater of operations. The blog reported that man was Abdul Reza Shahlai, said to be commander of the Quds Force's elite special-ops Unit 400. Shahlai was previously said to have planned the 2011 plot to assassinate Adel al-Jubeir, then Saudi ambassador to the United States and current Saudi foreign minister.

In addition, he was linked in several media reports to be the brains behind an attack on an American military installation in Karbala, Iraq, which claimed the lives of several American soldiers.

Beyond assisting Houthi rebels with munitions and training, the intelligence blog reported, Iran also attempted to conduct an armament smuggling ring to Gaza terrorist organizations, chiefly among them Hamas and Palestinian Islamic Jihad.

As part of the smuggling operation, two locals named Abu Ibrahim al-Hadi and Rabi' Jarman were said to have been tasked with temporarily storing the armaments in Yemen. Two additional people named Abed al-Majid al-Harazi and Abu Abdullah were fingered by the blog as those managing the link between the Quds Force's smuggling ring and Hamas. The armaments were meant to be transferred to Gaza via the Red Sea and were said to include rockets and advanced Kornet-model antitank missiles. Hezbollah Secretary-General Hassan Nasrallah boasted only recently his organization had also supplied Kornet missiles to Gazan terrorist organizations. Despite the complex operation, Iran's alleged success rate in operating the smuggling ring has not been high over the past few years, with reasons cited being the involvement of Yemenite entities whose interests do not necessarily align with those of the Palestinians as well as the international campaign to foil Red Sea armaments shipments.
Quds Force commander Soleimani touring Syria in October
X

On a related matter, a video was published recently showing the Iranian Quds Force's commander Soleimani touring the Syrian town of Mayadin, taken from the Islamic State this past October. The video ran contrary to a statement made by Defense Minister Avigdor Lieberman in a Ynet studio interview this week in which the minister said there was no Iranian military presence in Syria.