Zeman. Presenting himself as a defender of Israel.
Photo: EPA 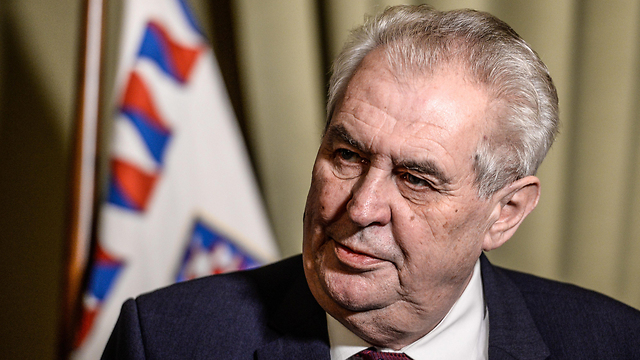 Milos Zeman, president of only European country to recognize Jerusalem as Israel's capital following US announcement, says European Union states 'are doing all they can so a pro-Palestinian terrorist movement can have supremacy over a pro-Israeli movement.' Meanwhile, Israeli officials blast Europe for failing to condemn rocket fire at Israeli city of Sderot.

Czech President Milos Zeman on Saturday accused EU states of being "cowards" in their response to his US counterpart Donald Trump recognizing Jerusalem as Israel's capital.

"The European Union, cowards, are doing all they can so a pro-Palestinian terrorist movement can have supremacy over a pro-Israeli movement," said Zeman, presenting himself as a defender of Israel.

The 73-year-old Zeman, targeting a second term from January and who had Friday said he was happy at Trump's controversial move, made Saturday's comment before delegates attending the congress of the far right Freedom and Direct Democracy party, which opposes immigration and the EU.

Czech President Milos Zeman had previously said on a 2013 visit to Israel of how he also favors moving the Czech embassy from Tel Aviv to Jerusalem (Photo: EPA)

Trump recognized Jerusalem as Israel's capital on Wednesday in a move that outraged Palestinian leaders, but which was hailed as historic by Israel.

Zeman said he had himself spoken in favor of Prague moving the Czech embassy to Jerusalem from Tel Aviv on a visit four years ago—a proposal which met with a reserved political response in his homeland.

Following Trump's announcement the Czech foreign ministry said it saw Jerusalem as the future capital both of Israel and a future Palestinian state and that Prague could only consider moving its embassy after consulting regional partners.

The EU's diplomatic chief Federica Mogherini warned on Thursday that Trump's move had a "very worrying potential impact" and could take the region "backwards to even darker times than the ones we're already living in."

Mogherini added that "the aspirations of both parties must be fulfilled and a way must be found through negotiations to resolve the status of Jerusalem as the future capital of both states."

Prime Minister Benjamin Netanyahu left Saturday evening on a two-day official visit to Paris and Brussels, vowing not to accept "double standard" from Europe on Trump's decision to recognize Jerusalem as Israel's capital.

"While I respect Europe, I am not prepared to accept a double standard from it. I hear voices from there condemning President Trump's historic statement, but I have not heard condemnations of the rockets fired at Israel or the terrible incitement against it," Netanyahu said.

"I am not prepared to accept this hypocrisy, and as usual at this important forum, I will present Israel's truth without fear and with head held high," he added.

Israeli state officials blasted the "European hypocrisy," saying that while the European foreign ministers rushed to strongly condemn Trump's announcement, they failed to condemn the rockets fired at the southern city of Sderot over the weekend. Government workers said Israel had detected Palestinian attempt to get Ireland, Sweden and other European countries to advance anti-Israel moves in the EU and in other international forums in response to Trump's announcement.

This will be the first visit to the EU by an Israeli prime minister in 22 years. "During his visit to Brussels, Netanyahu will receive another reminder from the European foreign ministers on the centrality of the Israeli-Palestinian issue to Israel's foreign relations," says Dr. Nimrod Goren, head of Mitvim—The Israeli Institute for Regional Foreign Policies.

"Netanyahu will be reminded that any progress in the Israeli-Palestinian issue could help Israel gain international support for promoting its vital interests in the Middle East," Dr. Goren adds.

"In the past few months, the prime minister issued degrading and dismissive statements against the European Union in an apparent attempt to make a political gain from attacking one of Israel's main partners. The way he organized the invitation to the breakfast in Brussels added to the tensions and is another missed opportunity.

"This is the first time in more than 20 years that an Israeli prime minister visits the EU institutions in Brussels, and when such a visit finally takes place, it shouldn't be done in such a twisted way and should be coordinated with the EU leaders, including a speech at the European Parliament, which would lead to agreements and progress in Israel-EU relations."