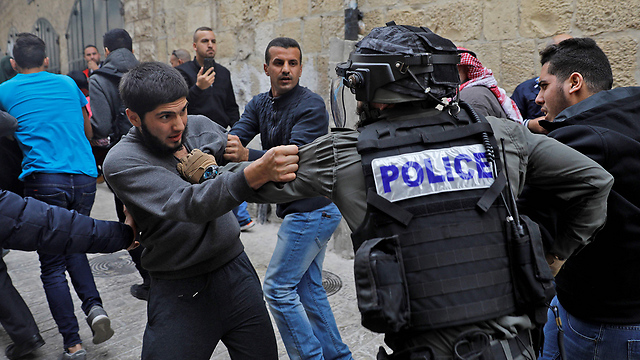 Two Palestinians were killed in on the Gaza Strip border by IDF rounds on Friday afternoon, according to the Gaza Health Ministry, as thousands of Palestinians clashed with Israeli security forces in the strip and throughout the West Bank following the conclusion of Islamic Friday prayers, in yet another 'day of rage' over US President Donald Trump’s declaration of Jerusalem as Israel’s capital.

"Zakaria al-Kafarhneh, 24, and Mohamed Muheisen, 29, were both killed after being shot during clashes that broke out on the border with Israel," the ministry stated, adding that "at least 40 other Palestinians (in Gaza) were injured by live ammunition."

Violent skirmishes broke out in a number of sites that have become flashpoints for angry protests, including near Rachel’s Tomb, in Bethlehem, at the entrance of the Palestinian refugee camp Al-Arroub in northern Hebron, at the entrance of Ramallah, Nabi Salih and Beit Ummar.

Direct clashes also broke out between Palestinians and Israeli forces in the Old City of Jerusalem. At least 17 rioters were reported to have been injured during the unrest.

Israeli security forces employed riot dispersal techniques as the demonstrators peppered them with Molotov Cocktails and rocks, and lit tires as they wrought havoc on the areas for a third consecutive Friday since Trump made his announcement, in which he also declared his intention to move the US embassy in Tel Aviv to Jerusalem.

A statement by the IDF Spokesperson's Unit said that "in recent hours, violent riots have erupted in several locations in the West Bank, in which some 1,700 Palestinians are burning tires, hurling Molotov cocktails and throwing stones at IDF and Border Police forces.

"The forces responded by means of riot control. So far, six rioters have been lightly injured.

"In the Gaza Strip, some 2,000 Palestinians are demonstrating in seven locations along the Gaza Strip, burning tires, and throwing stones at IDF forces. In the course of the violent disturbances, shots were fired at central instigators."

Evident in the calls for further protests after Friday’s prayers outside the al-Aqsa mosque was the rise in popularity of Turkish President Tayyip Erdogan, who has sought to entrench himself as the leader of Arab and world efforts to overturn Trump’s decision.

Many protesters leaving the mosque could be seen carrying placards with Erdogan’s pictures, along with that of Ahed Tamimi—a 16-year-old Palestinian girl who was arrested this week after she was recorded with her cousin repeatedly assaulting two IDF soldiers as her mother Nariman intervened and confronted the soldiers.

As the clashes took place, Palestinian Authority President Mahmoud Abbas said during a joint press conference with his French counterpart Emmanuel Macron that he wanted peace.

“We want peace with Israel and we want to reach a solution peacefully, Abbas said. “Recognition of a Palestinian state is an investment in peace. We are the ones who expound a culture of peace and not war.”

To underscore the point, he told his listeners to watch the protests that are taking place in Palestinian territories which he argued are being conducted peacefully, “and still Palestinians have been killed.”