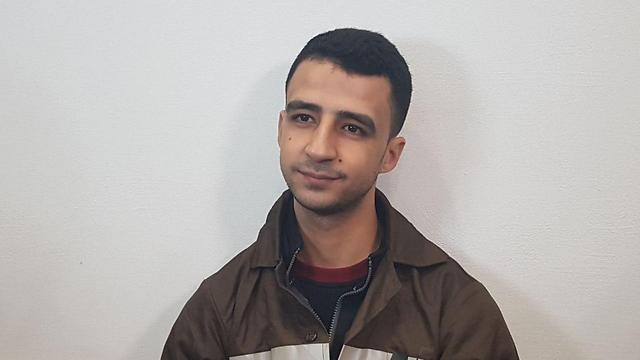 After acquitting 23-year-old Khalil Nimri of charges of planning a bombing at a Eilat hotel when the evidence pointed to a false identification, the Be'er Sheva District Court urges on the Shin Bet to reexamine its investigative techniques.

Judges at the Be'er Sheva District Court have leveled harsh criticism against the Shin Bet's interrogation techniques for detainees arrested in connection with security offenses.

Last month, the court acquitted 23-year-old Khalil Nimri of charges of planning to plant a bomb at a hotel in the southern resort city of Eilat, despite the fact Nimri had confessed to the plot.

In their reasoning, which was not released at the time of the acquittal, judges Ariel Vago, Aylon Infeld and Ariel Hazak noted the defendant was arrested under the Shin Bet's mistaken belief that he was behind the plot to bomb the hotel and may have been falsely jailed.

Khalil Nimri (Photo: Haim Horenstein)
Nimri was arrested in 2015 after he was identified by the hotel's receptionist as the person who came to tour the hotel and asked suspicious questions about the rooms. He was taken in for interrogation by the Shin Bet, during which he confessed to have planned to carry out an attack at the hotel. But a short time later, the same receptionist spotted the person who actually took the tour of the hotel—Ashraf Salameh, 25. The receptionist called the police and admitted his mistake, and Ashraf was taken in for questioning as well. Instead of admitting the mistake and releasing Nimri, the Shin Bet formulated a theory according to which the two—both residents of east Jerusalem who were working in Eilat at the time—planned to carry out the attack together. "The Shin Bet's investigation methods are unknown to us," the judges wrote. "It can be assumed that when given appropriate intelligence, the Shin Bet knows how to carry out an investigation to thwart the threat in the most effective manner. However, in this case, at least based on the evidence presented before us, there is concrete concern that the defendant (Nimri) was arrested and spent two years in detainment while innocent of any crime." The judges went on to say that "the defendant was arrested under the false belief of the Shin Bet that he was the one who came to the hotel." The Shin Bet, the judges wrote, "was very confident about the matter, and its interrogators accused the defendant again and again of lying about not having visited the hotel, while he was telling the truth." According to the verdict, the standard procedures for identifying suspects were not carried out: There was no lineup—which would've exposed the mistake—and Nimri's alibi was not checked. In addition, the investigators did not properly examine hotel security footage, in which Nimri does not appear.

"These actions would have been taken had the defendant been investigated by any regular police investigator, at any police station in Israel. Israel Police investigators know the suspect's claims must be checked immediately, even if they don't believe him. Unfortunately, the Shin Bet did not conduct the investigative procedures that are commonplace in the police and led the defendant to confess he had visited the hotel," the judges wrote.

The Eilat hotel that was the target of the foiled attack (Photo: Meir Ohayon)
The judges also addressed Nimri's alleged partner-in-crime, Ashraf Salameh. Salameh's trial is currently ongoing, and he has confessed and repeated his confession several times. "It is possible—and we do not know this—that the state's theory is backed by rich intelligence that indicates the defendant's guilt as well as Ashraf's—intelligence that has not been presented to us. However, based on the partial evidence before us, it appears a horrible error has been made, with the investigative techniques leading to a false confession." The judges urged the Shin Bet to reexamine its methods, "to ensure the investigative methods, which do lead to the exposure of dangerous terror acts quite often, do not lead innocent people to confess to things they did not do." The court also criticized the Israel Police, saying "Police investigators may have allowed the defendants to make their claims of innocence, but they did not do enough. A police investigator is not a clerk whose job is to carry out the investigation based on the instructions of his superiors. The investigator is a judge, even on a small scale, whose job is to uncover the truth amid the lies." The Southern District Attorney's Office has appealed Nimri's acquittal to the Supreme Court. Attorney Esther Bar-Zion, who represents Nimri, said "The security branches are making a great effort to ensure the safety and security of the public. There are cases in which even the best fall into the trap of narrow thinking and ignore—not due to malice, but rather negligence—serious problems in the investigation materials. The best judicial work—done with no discrimination—can identity faults and failures. And even though a citizen confesses, the best judicial work examines all of the evidence and knows when to acquit." The Shin Bet said in response: "The Be'er Sheva District Court's decision regarding Khalil Nimri, including its reasoning, is being studied by all relevant bodies, including examining the possibility of appealing this decision to the Supreme Court."