A photo from the database showing a Haredi family with no women
Photo: Lapam 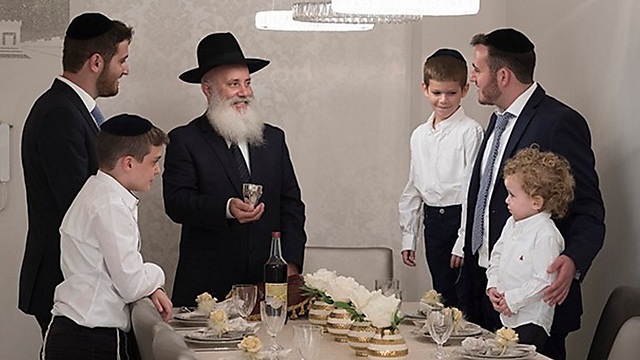 The Ministry for Social Equality has launched an Israeli photo database this week, purporting to present all of Israel's different sectors for use in government publications. Alongside photos of Arab, Druze and other Jewish families, the database also contains photos of Haredi families, which depict no women of any age.

Some thirty photos of Haredi families were shot for the initial pilot, and not one of them included women or even young girls, not even photos illustrating the family's Shabbat table.

A Haredi family's Shabbat table--with no women present (Photo: Lapam)
With this move, the Ministry for Social Equality effectively fell in line with a trend prevalent in the Haredi world of advertising, which is judicious in avoiding the use of images of females. Almost no women or girls could be spotted in the Haredi sector's advertisements over the past few years, while non-Haredi billboards showing women are often defaced in areas with a large concentration of Haredim, such as Jerusalem. Advertisers, for their part, prefer to use images as neutral as possible to skirt controversy.

The pride of the Ministry for Social Equality

Deputy Attorney General Dina Zilber had been tasked with handling the exclusion of women from the public sphere up until recently, when she was replaced by Social Equality Minister Gila Gamliel. Gamliel was also the person in charge of allocating NIS 2 million for the photo database project.

(Photo: Lapam)
"For years government publications contained the same template of people with bright skin, eyes and hair," Gamliel said. "Not only is that not representative (of Israel), it also flies against the real and moral truth. The new photo database is the new face of Israel, our face. We've marked an important moral boundary here, and I can but hope Israeli advertising will follow the government's example." The Ministry for Social Equality boasted this week of the immense amount of thought put into the project. "A detailed brief for the photographers was put together on each topic, containing their subjects' characteristics, ages, common situations, locations, family make-ups and so on," a message put out by the ministry said. Lofty statements aside, the ministry tasked with ensuring social equality and the Government Advertising Agency, entrusted with managing all governmental publications, both seem to have fallen in line with the Haredi rules of engagement on the matter.

'Extremists are taking over the public space'

"We've gotten used to the fact Haredi newspapers never show women or girls," said Chairperson of the Ir Va'Em movement Michal Chernovitsky, whose organization promotes the rights of Haredi women. "Some have acceded to that reality, but it is also the subject of much criticism in the Haredi sector. Our children our growing up in a virtual world that makes no sense whatsoever."

Haredi activist Michal Chernovitsky said the ministry was yielding to the most extreme elements in Haredi society (Photo: Israel Bardugo)
"It's truly sad to see the Ministry for Social Equality falling in line with this trend and society's most extreme elements, without providing the option of representation for a Haredi family that includes women," Chernovitsky added. "This is yet another example of the most hard-line factions within Haredi society taking gender separation to absurd new heights. Those same extremists are slowly taking over the entirety of public space, and they have now received a governmental seal of approval," she lamented.

Minister Gamliel's ministry said the first crop of photos constituted merely an initial pilot and that photos of Haredi women will be added later (Photo: Evyatar Nisan)
The Ministry for Social Equality responded: "The pilot is an initial trial, part of a historic attempt to build an Israeli photo database, ensuring proper representation for all facets of Israeli society. It's also an initial selection, encompassing merely four of more than twenty worlds of content and sectors included in the final database, which will receive remarks from the Ministry for Social Equality before being finalized. "Minister Gamliel has instructed to carry out the necessary actions to complete the database in the near future, which include photos of Haredi women and complete Haredi families."