IDF soldiers on the Gaza border 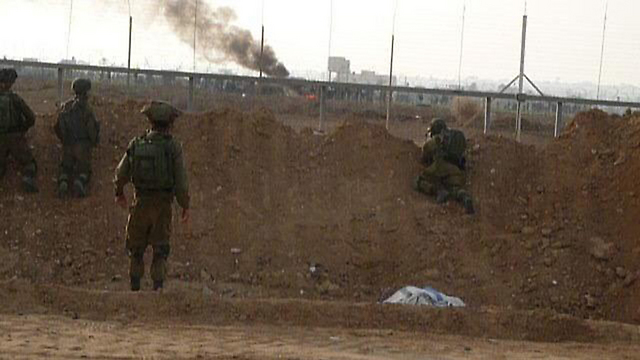 Behind earthen dams are IDF fighters who are careful not to raise their heads as tire-burning Palestinian rioters are catapulting marbles at them just as dangerous as bullets. When the rioters make a run for the border fence, the IDF's snipers go into action. Hamas fighters in military positions nearby look on but hold their fire, trying to avoid escalation. Ron Ben-Yishai joined Golani and Duvdevan soldiers on their regular Friday activity - a cat and mouse game with the Palestinians.

As we travel towards the border fence, we see a pillar of thick black smoke rising to the heavens. "They're burning tires," the scout tells me as he suppresses a smile. "Burning tires look great on camera." He has been serving in this area for years, and he has already seen it all. The Palestinian protests that erupted following US President Donald Trump's recognition of Jerusalem as Israel's capital no longer surprise him. They take place, he tells me, all days of the week, but on Fridays after prayers in the mosques, Hamas and Islamic Jihad make special efforts to send young Gazans to protest along the border fence. We stop behind an earthen mound adjacent to the border fence. Behind it lie Golani and Duvdevan soldiers, divided into small groups, careful not to raise their heads. The Palestinian protesters are hurling glass marbles at them using slingshots. If such marbles hit the head or other sensitive parts of the body, they could kill. There are only 30 to 40 meters separating the soldiers and the protesters in some places. At this distance, marbles are as dangerous as a bullet, perhaps even more so.

On the other side of the fence are hundreds of Palestinians. Several hundreds of meters behind them is another row of protesters. Not far from the fence are Hamas and Islamic Jihad observation towers. Even without binoculars one can see the armed men standing inside them. Their job is to make sure things don't get out of control. Hamas wants protests that look good on camera, but not battles that lead to escalation. A group breaks away from the front row of Palestinians and runs forward, towards the fence. The IDF's snipers, hidden under camouflage nets, are aiming their M-24 rifles, waiting and asking for authorization to fire. Only the brigade or the battalion commanders are allowed to authorize live fire. And even then, it's only at the legs. The bullets are 7.62 mm caliber, which is why the snipers are careful not to shoot over the legs area.

Glass marbls catapulted at Israeli troops
The group of Palestinians that was running towards the fence a minute ago disappears. They managed to get into a ditch dug inside the security "perimeter" on the Palestinian side of the fence. They are trying to get to a barbed-wire fence the IDF erected there to make it harder on Palestinians to reach the main fence and sabotage it. Several of the young Palestinians, aged 18-25, are carrying Palestinian flags. All of a sudden, after having disappeared into the ditch, the heads of several of these Palestinians reappear right by the barbed-wire fence, and they try to sabotage it. An IDF jeep, equipped with a tear gas canister launcher, fires several volleys in their direction. They leave the fence and dive back into the ditch.

Hamas trying not to push it

All of this happens in the area west of the border fence. This area is under Palestinians sovereignty, but the IDF doesn't allow the Palestinians to enter it. It's about 200 meters wide. Army orders state that when an armed Palestinian reaches this area, the soldiers must shoot to kill because he is considered a terrorist. But the Palestinians provoking IDF soldiers right now are not armed.

The officer commanding the unit currently stationed on the earthen mound gets the okay to open fire in order to prevent the sabotaging of the fence, but the snipers are in no rush. They wait patiently for when they have a clear shot at the lower body. One of the snipers sees a head poking out near the fence. When the young Palestinian man jumps up and starts sabotaging the fence, the sniper shoots at his lower body. The bullet hits the ground next to the Palestinian, causing a small cloud of dust to erupt. The sniper curses under his breath. "I shouldn't have missed from this distance," he says. He asks and receives authorization and a vehicle to go to the shooting range and see if his rifle and scope are properly adjusted. Incorrect adjustment could lead to fatal mistakes.

Clashes on the Gaza border (Photo: Reuters)
One of the commanders tells me his objective is to have this event end without fatalities on the Palestinian side, and certainly without any casualties among IDF soldiers. "Fatalities on the Palestinian side only agitates them and inflames tensions, leading to more protests," the commander said. Now a little boy appears with a flag in hand, and the snipers don't shoot. The boy plants the flag in the earthen mound on the Gazan side of the border and dives back into the ditch. "Oh well, let him have it," someone says. "The Palestinian flag is on their side. Let them fly it as much as they want. We're not even trying to take it down." Restraint is the name of the game here, and this game is being played according to rules determined in advanced. We're in front of the eastern part of the refugee camps adjacent to Khan Yunis. At the same time, there are six other active hotspots of clashes, and the events there are playing out based on the exact same rules: Burning tires, cries of "Allahu Akbar," Palestinians running towards the fence and trying to sabotage it and fly Palestinian flags next to it, IDF sniper fire and Israeli jeeps launching tear gas grenades. "Today there is a relatively small number of protesters," one command tells me. There are some 500 young Palestinians in front of us, and several hundred more in other hotspots. It appears that after the rocket fire at midday, Hamas has decided not to push things too much. The number of protesters is smaller than before, and their provocations are considered moderate.

Around midday, things were far less moderate. Two rockets were fired towards an area where a ceremony was being held in memory of IDF soldier Oron Shaul, whose body is being held by Hamas. The rockets were relatively small, 107 mm Katyusha rockets, which were intercepted by the Iron Dome missile-defense system. But there was also a mortar shell fired, and it hit a home in one of the border-adjacent communities, causing damage to the structure. Behind the rocket fire were Salafi organizations, the ones Israel normally defines as "rebellious," but the IDF responded immediately with tank fire and rockets from fighter jets, hitting Hamas positions not unlike the ones in front of us.

It's clear Hamas is not letting the rebellious factions force it into an escalation with Israel, and the Gaza rulers even arrest members of these groups, some of which swore their allegiance to ISIS and al-Qaida. Islamic Jihad and Hamas are really not interested in an escalation, and it is evident by the armed men from both organizations stationed at the military positions in front of us, who have not responded to the IDF's sniper fire and are not trying to hurt the Israeli soldiers. There is no doubt the IDF's deterrence is working.

"They know very well that if they open fire, it won't be long before all of their positions on the front line are destroyed, as well as infrastructure deep inside the strip," one commander told me. Recently, IAF aircraft have paid visits to many Hamas and Islamic Jihad weapons factories in the strip.

At the top of Hamas's list of priorities right now is the Palestinian reconciliation. The Egyptians are putting pressure on both Hamas and Islamic Jihad to finalize the reconciliation with Abbas to bring calm to the strip and to prevent the transfer of weapons and fighters from Gaza to ISIS in the Sinai Peninsula.

Hamas also has an interest in Abbas renewing the flow of funds and civil aid to the strip to alleviate the suffering of the population in Gaza. With winter now here, Hamas is worried the population's anger and frustration will eventually be directed at the organization and its rule, so it is trying to dump the responsibility of the strip's civil and economic management to Abbas. In such a situation, Hamas's military wing will be free to prepare for the next round of fighting with Israel.

Hamas is actually trying to imitate Hezbollah, which lets the Lebanese government manage the daily life and the economy in Lebanon, while the terror group focuses on growing in strength and fighting in Syria. Escalation against Israel at this time will only get in the way of Hamas adopting that model.

Israel also has no interest in escalation right now, even though the IDF is prepared for it now better than it was before Operation Protective Edge and the campaigns that preceded it. At present, the IDF has one main objective, which is to complete the underground and overground obstacle along the Gaza border fence in a way that gives the residents living near Gaza not just security, but the sense of security as well.

To avoid escalation that would sabotage this effort, which was determined as a strategic goal, the IDF is now making sure to respond to every rocket fired from the strip by hitting Hamas targets. In this manner, the army works to maintain the deterrence and make it clear every violation of Israel's sovereignty, including disrupting the construction of the obstacle, will be answered with force.

Near evening, as it is starting to get dark, the protesters on the Palestinian side begin dispersing, but the IDF soldiers remain on the earthen mound for another hour to make sure there are no surprises.

Today's events were not unlike those of the last three Fridays, and will more than likely repeat next Friday.