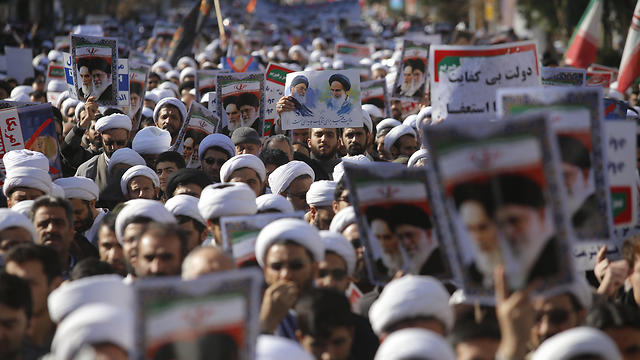 Pro-government rallies in Iran after days of protest, unrest

After week of protests against Iranian regime, thousands pour onto the streets in support of government, with Iranian media claiming it is to 'protest the violence' in recent days.

Iranian state media on Wednesday aired pro-government demonstrations in cities across the country after a week of protests and unrest over the nation's poor economy—a move apparently seeking to calm nerves amid clashes that have killed 21 people. The protests, the largest seen in Iran since its disputed 2009 presidential election, began December 28 in the city of Mashhad, Iran's second-largest, over the weak economy and a jump in food prices. They have since expanded to cities and towns in nearly every province. Hundreds have been arrested, and a prominent judge warned that some could face the death penalty. The English-language broadcaster Press TV broadcast Wednesday's pro-government rallies live, saying they were to "protest the violence that has taken place over the last few nights in cities." Demonstrators waved Iranians flags and signs supporting Iran's clerically overseen government.

Iranian clerics take part during a state-organized rally against anti-government protests in the country, in the holly city of Qom, south west Iran (Photo: EPA)

According to state TV, the demonstrations took place in at least 10 cities, including Ahvaz, the capital of the oil-rich province of Khuzestan, the Kurdish town of Kermanshah in the country's west and Qom, the religions capital of Shiite Islam in Iran.

The rallies come after Iran's Supreme Leader Ayatollah Ali Khamenei on Tuesday blamed days of protests across the country on meddling by "enemies of Iran."

"The seditionist rioters should be executed," marchers chanted on Wednesday, while posters they carried said hostile "hidden hands" guided from the United States, Israel and the United Kingdom should be cut off.

Khamenei avoided identifying any foreign countries, although he promised to elaborate in the coming days. Undoubtedly high on his list is the United States, where President Donald Trump has tweeted his support for the protests for several days. Iran's government has since shut down access to Telegram and the photo-sharing app Instagram, which now join Facebook and Twitter in being banned, in an attempt to slow the unrest.

"Obviously one of their charges can be Moharebeh," or waging war against God, Iran's semi-official Tasnim news agency quoted Mousa Ghazanfarabadi as saying. Moharebeh is punishable by death in Iran.