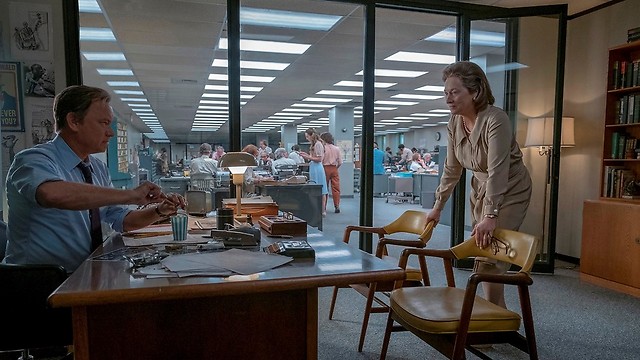 Lebanon bans 'The Post' over Spielberg's support for Israel

Steven Spielberg's new movie 'The Post' to be banned by Lebanese authorities; leaked US State Department memo previously revealed Arab League blacklisted Spielberg over support of Israel; despite ban, recent Spielberg movies have been allowed to be screened in the country.

Lebanon's censorship authorities have effectively banned Steven Spielberg's newspaper drama, "The Post," because the American director is on a regional blacklist for supporting Israel.

The directive by the country's General Security agency still needs to be signed by Interior Minister Nouhad Machnouk to enter into effect, but that is considered a formality that is unlikely to stop the ban.

The directive accompanied another ban on "Jungle," a survival movie based on the memoirs of Israeli national Yossi Ghinsberg.

Lebanon and other Arab nations have long maintained a cultural boycott against Israel. But the twin bans reflect the growing strength of a once-fringe movement to extend the boycott to people and companies seen as too friendly to Israel.

General Security, which is also charged with running Lebanon's only commercial airport, detained acclaimed Lebanese director Ziad Doueiri as he arrived last year to promote his latest film, "The Insult." The drama is Lebanon's entry to the Foreign-Language awards category at this year's Oscars.

Lebanese director Ziad Doueiri was briefly detained upon his return to Lebanon for shooting a film in Israel (Photo: AFP)

Doueiri was questioned on charges of doing business with Israel. His previous film, "The Attack," was banned in Lebanon and most Arab countries because it was filmed in Israel and featured several Israeli actors. All charges were dropped against him after news of his detention caused a scandal in the national media.

Also last year, Lebanese authorities banned "Wonder Woman" hours before it was due to premiere, following a campaign against its lead actress, Gal Gadot, who served in the Israeli army.

Supporters of the Campaign to Boycott Supporters of Israel in Lebanon could not be reached for comment Tuesday.

Lebanon is officially at war with Israel and Lebanese law bans its citizens from visiting Israel or having business dealings with Israelis.

But General Security and its censorship bureau have been inconsistent in their application of a cultural boycott. Several previous Spielberg films have played in Lebanon, including "The Adventures of Tintin," ''The BFG," and "Bridge of Spies." And the ban against "The Post" and "Jungle" is unlikely to prevent Lebanese from watching them through streaming websites or on bootleg DVDs.

Lebanese cinemas were already showing "Jungle" when they were advised to pull it, said Isaac Fahed, the Sales & Distribution Manager at Grand Cinemas, a Middle East cinema chain.

Grand Cinemas had been marketing "The Post" for two months, before it became clear a ban was in the pipeline, said Fahed.

Cinemas around Beirut have taken down posters promoting the film, which was set to premiere on Thursday.

The film is effectively banned from Lebanon unless Machnouk reverses the General Security recommendation, said an official at the agency who spoke on the condition of anonymity because he was not authorized to speak to the media.

Spielberg was blacklisted by the Arab League for his donations to Israel (Photo: MCT)

Lebanon officially follows an Arab League blacklist against supporters of Israel and organizations and companies seen as promoting or doing business with the country. A leaked US State Department memo from 2007 revealed that Spielberg was blacklisted by the League for donating $1 million to Israel for reconstruction during its 2006 war with Lebanon.

Gino Raidy, a board member of the NGO March, which advocates freedom of expression in Lebanon, described the General Security's censorship regime as "pointless" and "frustrating."

"The real loss from censorship is against Lebanese filmmakers, who with every passing month get more and more 'red lines' they cannot cross."

"The rise in censorship means that the censors know they're losing the culture war, and that people are overwhelmingly against it, hence the frenzied, incoherent attempt to ban things they don't understand, or don't fall into their extremely narrow worldview," he wrote in his blog.