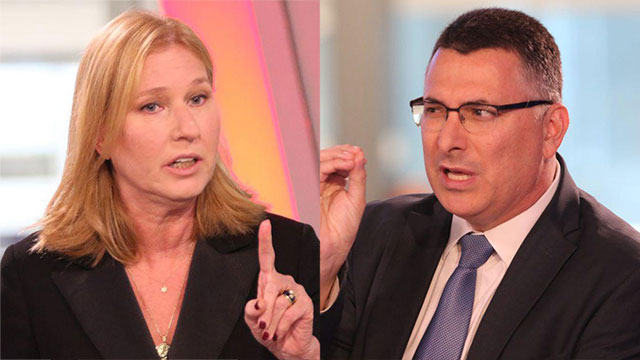 Livni hopes Pence's visit not a 'death certificate for peace'

Hatnua leader and former Likud minister Gideon Sa'ar lock horns over significance of Pence's Israel visit: Livni: 'The interests of Netanyahu and the Bayit Yehudi are not those of Israel'; Sa'ar, meanwhile, says visit is 'a wonderful opportunity to present our expectations while arriving at the optimal understanding with the US on the Palestinian issue.'

MK and leader of the Hatnua political faction Tzipi Livni expressed hope Monday that US Vice President Mike Pence’s three-day trip to Israel would not be exploited to serve as a “death certificate to peace” between Israel and the Palestinians.

Expressing her hope that Pence’s visit would be a prelude to renewed peace negotiations, Livni entered into a heated discussion during a Ynet studio interview with former Likud minister Gideon Sa'ar, who focused his attention on Palestinian Authority (PA) President Mahmoud Abbas’s scathing remarks about Pence.

“What we see in the speech of curses by Abu Mazen is the loss of strategic sense," he said, adopting Abbas's moniker, in reference to the PA president's speech earlier this month in which he cursed President Trump.

MK and leader of the Hatnua political faction Tzipi Livni and former minister Gideon Sa'ar (Photo: Avi Moalem)
Livni and her ilk on the political Left, Sa’ar continued, “are going back to the same position that the Palestinians themselves have disavowed. They have no interest in negotiations, and in recent years they have pursued a line that is intended to isolate, delegitimize and condemn Israel while at the same time seeking unilateral achievements in international organizations for which they don't pay any price.”

According to Sa’ar, a prominent figure in the Likud and a once rising star in its ranks, Pence’s visit offers “a wonderful opportunity to present our expectations while arriving at the optimal understanding with the Americans on the Palestinian issue. The same is also true for Iran and Syria.”

“If the Trump administration and Vice President Pence view Israeli interests as the platform of the Bayit Yehudi party or those of Netanyahu, it won’t serve the interests of the State of Israel,” Livni argued.

Slamming Prime Minister Benjamin Netanyahu’s Likud faction for recently urging legislators in a non-binding resolution to effectively annex Israeli settlements in the West Bank and extend Israeli sovereignty over the Jordan Valley, Livni said that it was not conducive to the goal of “preserving a future opening” for negotiations, asserting that “more annexation laws and isolated settlements only block these.”

Livni, a former chief negotiator with the Palestinians and former occupant of prestigious political posts, also cited the demographic argument often dangled above the political Right warning that the annexation and the concomitant incorporation of millions of Palestinians into the Israeli population would result in the demise of its Jewish majority.

“I don’t want to incorporate millions of Palestinians with their potential for terror. That will only drag us into continued violence,” she asserted.

“I also prefer to give up some of the Land of Israel in order to preserve Israel as a Jewish and democratic country.”

For Sa’ar however, the Likud's Central Committee vote clearly pertained to areas populated by Jews.

“It doesn’t include the Palestinian territories. At one stage, when we withdrew, we were told that we were doing so in order to prevent the demographic problem. After that we were told to uproot Israeli communities in the territories. Therefore, there is no such deal with a sovereign state, and we should move away from this idea of ​​upgrading the status of the Palestinian Authority to a state next to us,” Sa’ar replied. “In Judea and Samaria, there are half a million residents, and it is worth internalizing this reality."

On Monday, Pence promised to move the US Embassy in Israel to Jerusalem "before the end of next year" in a Knesset speech that earned him rousing applause and multiple standing ovations from the gathered lawmakers.