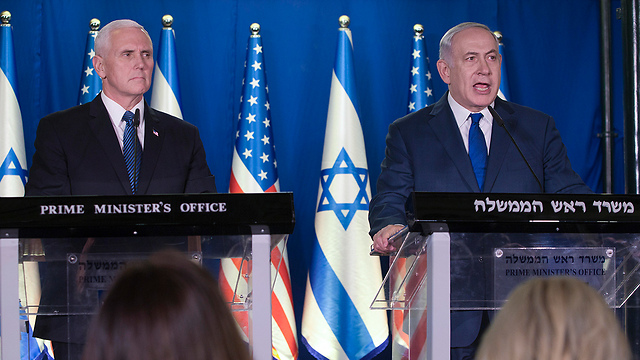 Pence: 'Best days for our most cherished ally yet to come'

US VP Mike Pence spends second evening in Israel dining with the PM at his official residence in Jerusalem, where during a joint statement he said he was here to 'simply celebrate and affirm the bond between our two peoples;' Netanyahu warns if Iran nuclear deal not ‘completely fixed or nixed,’ Israel will support Trump in pulling out.

US Vice President Mike Pence said Monday evening he had visited Israel 'simply to celebrate and affirm the bond between our two peoples,' predicting that with President Donald Trump in the White House, “the best days for our most cherished ally, Israel, are yet to come.”

Flanked by Prime Minister Benjamin Netanyahu at a joint press conference held before he and his wife Sara hosted Pence and his wife Karen for dinner at the prime minister's official residence in Jerusalem, the vice president opened his remarks by expressing his gratitude to the Netanyahu family for welcoming him into their home.

(Photo: AP)
"I am humbled to be in Israel," he said, adding that America “cherishes our historic alliance."

Telling the prime minister that it was “an honor for me to stand here today in Jerusalem, the capital of Israel,” Pence allowed for a brief pause before delivering the latter remark that was met by a quiet laugh from the Israeli premier and a round of applause from those in attendance.

Pence said that he had spoken to President Trump earlier in the afternoon, who had asked him to express his personal greetings not only for the hospitality that the Netanyahu had extended to the vice president, but for “your stirring words before the Knesset, and your stalwart commitment to freedom, your strong leadership for the people of Israel and your commitment—your unbending commitment—to the relationship between the United States and Israel.”

Reaching the peroration of his speech and telling the journalists that a trip to the Yad Vashem Holocaust Museum in Jerusalem, along with a visit to the Kotel, is on his itinerary for his third and final day in Israel, Pence said that each visit to the holy land left him and Karen with a reinvigorated sense of faith.

Even though this was their fourth visit to Israel, Pence said “We never leave the country without our faith being renewed.”

Pence’s remarks were preceded by a statement delivered by Netanyahu, who opened by saying that the two had discussed earlier common challenges which included, first and foremost, Iran.

Netanyahu, whose opposition to the Iranian nuclear deal has found resonance in the new US administration, also praised President Trump and the vice president for supporting Iranian citizens who recently staged protests against the Islamic regime.

“The tyrants of Theran have spent billions of dollars spreading murder and mayhem throughout the middle east to advance their poisonous ideology. I want to salute both President Trump and you Mr. Vice President for standing with the people of Iran,” he stated emphatically, “when so many in Europe and elsewhere were shamefully silent.”

It was hard to believe, Netanyahu continued, that “some actually hosted the regime’s mouthpieces while its goons were throwing thousands of Iranian protesters into prison.”

Turning his focus to the Iran deal, a hallmark of Barack Obama’s foreign policy, Netanyahu warned the international community that Israel would have no compunction in supporting President Trump’s possible withdrawal from the agreement if the "failings of this failed deal" were not amended.

"There is still time for leaders to seize the opportunity that President Trump has offered them to correct the failures,” Netanyahu said.

“But if those leaders do not seize that opportunity or if they offer only cosmetic changes, Israel will unequivocally support the president’s decision walk away from a bad deal and restore crippling sanctions. Our position is clear: 'Fully fix it or fully nix it ”

Israel would continue to work with the Trump administration to advance peace with the Palestinians, Netanyahu said, but Palestinians must recognize the Jewish connection to the country.

"Israel will continue to work with President Trump's able representatives, Jared Kushner, Jason Greenblatt, Ambassador David Friedman, along with our ambassador Ron Dermer, to advance peace with all our neighbors, including the Palestinians," he promsied.

"The sooner the Palestinians accept the truth about the millennial connection of the Jewish people to this land and to this city, the sooner we can work together to reach an historic agreement that will create a better future for both our peoples."

Earlier Monday, Pence promised to move the US Embassy in Israel to Jerusalem "before the end of next year" in a Knesset speech that earned him rousing applause and multiple standing ovations from the gathered lawmakers.