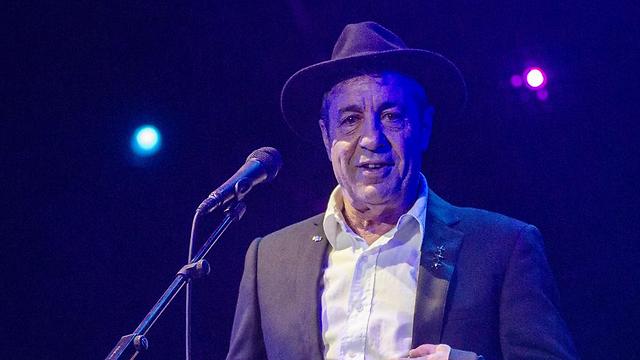 Yehonatan Geffen apologizes for poem comparing Palestinian teen provocateur Ahed Tamimi to Holocaust victim; 'I merely wished to illustrate that just like our preoccupation with creating national heroes, the Palestinians are also entitled to create their own heroes,' Geffen says.

Poet Yehonatan Geffen apologized for a poem he wrote comparing Palestinian teen provocateur Ahed Tamimi with Anne Frank and Hannah Szenes during a performance in Petah Tikva on Saturday.

"It was a mistake, and I apologize to anyone who was personally hurt by it," Geffen said.

"I merely wished to illustrate that just like our preoccupation with creating national heroes—from (Joseph) Trumpeldor to Moshe Dayan—the Palestinians are also entitled to create their own heroes," Geffen added.

Geffen apologized to anyone 'personally harmed' by his poem (Photo: Avi Kakun)

"My mistake was tacking Hannah and Anne, whom I profusely admire, onto the list. Bringing Anne Frank and Hannah Szenes into this story was a mistake, and I wholeheartedly apologize for it. I could have just as well have written Ahed Tamimi stood alongside Wonder Woman and Gal Gadot," he elucidated.

Not content with merely apologizing, however, the beleaguered poet attacked the media for its part in disseminating the story. When asked by a female audience member why his apology was not made publically through the media, Geffen retorted, "The media is garbage, they're only looking for gossip to make me look like an idiot." "I have been besieged for a week, I haven't eaten anything in a week. I have no interest in opening up to the media, because they will always distort it, because they're only looking for sensationalism and gossip," he said. The woman persisted, and asked Geffen why he was apologizing in a closed forum. "Because I like you, and I hate them," he responded. "Once (Defense Minister Avigdor) Lieberman boycotted me, people called me an old drunkard, everybody boycotted me—there are two things to do. The first is bringing the occupation back to the headlines, because we've been occupying another people for the past fifty years, damn it. The second is bringing up our preoccupation with creating national heroes. The Palestinians are also allowed to create their own heroes," Geffen said.

Defense Minister Lieberman instructed Army Radio to boycott Geffen and his works (Photo: Nahum Segel)
"Today, on International Holocaust Remembrance Day, I can tell you that it was a mistake, and I apologize for it, especially to those who were personally hurt (by the comparison)," he concluded. Responding to Geffen's apology, Defense Minister Lieberman—who soundly criticized Geffen and called for a boycott of his works—tweeted, "He who confesses and recants shall find mercy." The controversy originated in a poem the poet, singer and satirist published on his Instagram account a week ago, in which he compared Tamimi, who slapped an IDF officer, to Anne Frank, Hannah Szenes and Joan of Arc.

Geffen uploaded a photo of Tamimi and attached a poem describing the teen as a fighter for justice. "A pretty 17 year old did a terrible thing, and when a proud Israeli officer once again invaded her home, she slapped him," he wrote.

The poet originally compared 17-year-old Tamimi to Anne Frank (Photo: EPA)
"She was born into it and that slap carried 50 years of occupation and humiliations. On the day the story of the struggle is told, Ahed Tamimi, with red hair, like David who slapped Goliath, you'll be alongside Joan of Arc, Hannah Szenes and Anne Frank," he concluded the poem. Tamimi, 17, was captured on camera hitting the soldier last month and was arrested. She was later indicted with assaulting the soldier, and was remanded last week until the trial's conclusion.