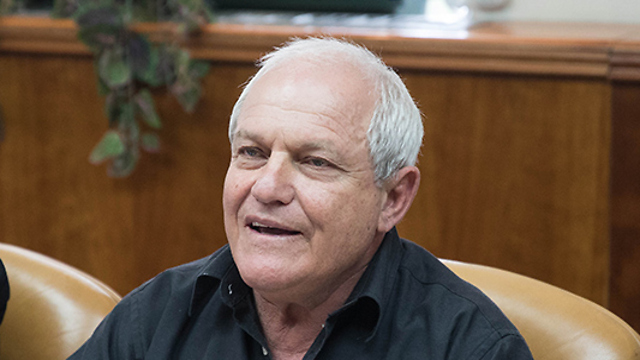 Police recommend indictment against Minister Haim Katz and other senior officials in the Israel Aerospace Industries on corruption charges; Katz: 'Anyone who isn't blind and knows what the investigation is about understands there is no basis to these delusional allegations.'

Minister Katz, who was questioned by police on several occasions for a total of some 10 hours, is suspected of fraudulently obtaining benefits, fraud and breach of trust and extortion and intimidation. His son, Yair Katz, is suspected of the same offenses.

The others are suspected of fraud and breach of trust and extortion and intimidation, among other things.

"I expected nothing else of the police," Katz said in response to the police recommendation. "It's obvious they can't admit that the massive amount of resources they invested in this bizarre investigation were for naught."

"Anyone who isn't blind and knows what the investigation is about understands there is nothing to this, and there is no basis to these delusional allegations," he continued.

"It's clear to me that common sense and logic would prevail at the State Attorney's Office, and that a decision will be made not to indict me on this matter," Katz concluded.

Katz and other senior union members are suspected of abusing their position for their own benefit, according to a statement issued by the police.

Katz allegedly received assistance from union members, and in return helped them receive high-paying jobs both inside the IAI and outside of it.

After being elected into office, Minister Katz allegedly acted against instructions from the attorney general when he intervened in the appointment of the IAI board of directors chairman and interfered in internal issues relating to the IAI's workers' union.

He is also suspected of using IAI resources and employees for his own benefit to the tune of thousands of shekels, while holding public office.

Katz's close associate Eli Cohen, according to police, allegedly worked to give the company A.B. Aviation Service, which provides the IAI with painting and cleaning services, illicit benefits and favorable payment conditions, as well as clear preference over others in tenders. In order to conceal their criminal activity, A.B. Aviation Services' owners are suspected of submitting fictitious invoices.

Cohen is suspected of taking advantage of his position to demand and receive different food products that were provided in large quantities to the IAI by sub contractors for free. He allegedly used these food products to his own benefit.

Cohen is also suspected of using IAI employees to his own benefit, as well as receiving reimbursements for trips abroad in contravention of procedures in the IAI.

Brig. Gen. (res.) Amal Asad, is believed to have received benefits from the company DruzeNet, which allegedly transferred funds to him through his relatives so he would help them keep their IAI contract.

Asad allegedly concealed the fact he is a shareholder in the company and took advantage of his position as a member of the board of directors to help the company win contracts.