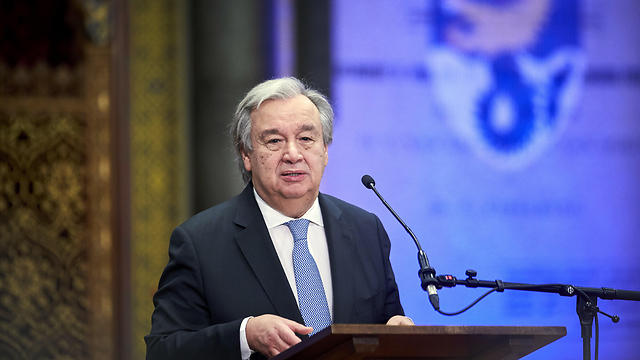 On the heels of Israel's interception of Iranian UAV, strike in Syria and downing of Israeli F-16, which all took place Saturday, UN chief calls on all sides 'to work for an immediate and unconditional de-escalation of violence and exercise restraint.'

United Nations Secretary-General Antonio Guterres on Saturday called for an immediate de-escalation in Syria after Israel carried out raids inside the war-torn country.

Guterres is “following closely the alarming military escalation throughout Syria and the dangerous spillover across its borders,” UN spokesman Stephane Dujarric said in a statement.

Israel targeted what it said were Iranian positions inside Syria after one of its warplanes was hit by Syrian air defenses and crashed.

The Israeli raids came after it intercepted what it said was an Iranian drone entering its airspace.

Guterres stressed that all concerned in Syria and in the region must abide by international law.

“He calls on all to work for an immediate and unconditional de-escalation of violence and exercise restraint,” Dujarric said.

It was the most serious confrontation between Iran and Israel since Syria’s war began in 2011 and came amid growing alarm over Syrian government offensives against rebel-held Eastern Ghouta and Idlib.

The Syrian people are suffering “though one of the most violent periods in nearly seven years of conflict,” said the UN statement.

“Over 1,000 civilian casualties from airstrikes were reported in the first week of February alone.”

Guterres urged the parties to move quickly toward a political solution to end the war.

Israel’s Ambassador Danny Danon called on the Security Council “to condemn this dangerous act and to put an immediate end to Iranian provocations.”

Diplomats, however, said there were no immediate plans to convene a council meeting despite the sharp rise in tensions.

The council is due to discuss the crisis in Syria on Wednesday.