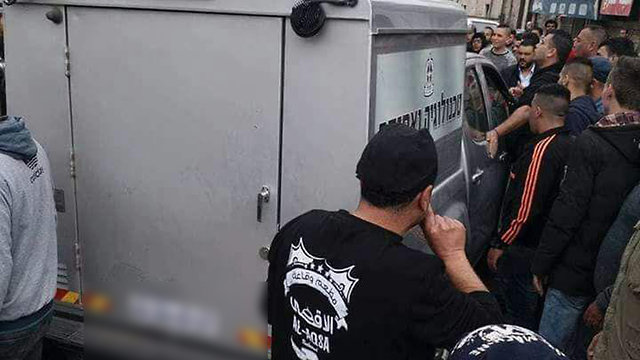 Two soldiers, a man and a woman, lightly wounded by stones as Palestinians encircle their vehicle in the West Bank city, smash the windowpane and steal one of the soldiers' weapon; Palestinian police officers help rescue them from the mob, transfer them to the Jalameh crossing.

Two soldiers who accidentally entered the West Bank city of Jenin on Monday were attacked by young Palestinians who encircled the military vehicle.

The two soldiers, a man and a woman, were wounded by stones. One of the soldiers' weapon was stolen, the IDF reported.

Palestinian police officers helped rescue them from the mob.

Documentation of the incident released by the Palestinians
X

Documentation of the incident released by the Palestinians

The female soldier sustained light to moderate wounds in her face and legs from the windshield glass. Images released by the Palestinians show her bleeding from her face. She was evacuated to a hospital in Afula.

Documentation released by the Palestinians shows the mob attacking the soldiers with stones and chairs and the female soldier screaming with blood on her face. A Palestinian policeman is seen trying to protect the soldiers and even shooting in the air to drive the mob away.

Soldiers attacked by Palestinians in Jenin

Security sources say the two soldiers were transferred to the Jalameh crossing by the security apparatuses in coordination with the Civil Administration.

An initial IDF investigation into the attack found they were using the Waze app on their way from the settlement of Shavei Shomron to Afula.

Earlier this month, an Israeli citizen drove into the Palestinian town of Abu Dis near Ma'ale Adumim and was attacked by Palestinians, who torched his car and lightly wounded him.

The 59-year-old Israeli man from Tel Aviv went to Wadi Qelt to ride horses and got lost on his way back, ending up in Abu Dis near the Al-Quds University campus, where several Palestinians noticed him and started hurling stones at him.

Palestinian security forces who arrived at the scene protected him and contacted the Jerusalem area's District Coordination and Liaison Office in order to hand him over to the IDF and Civil Administration.