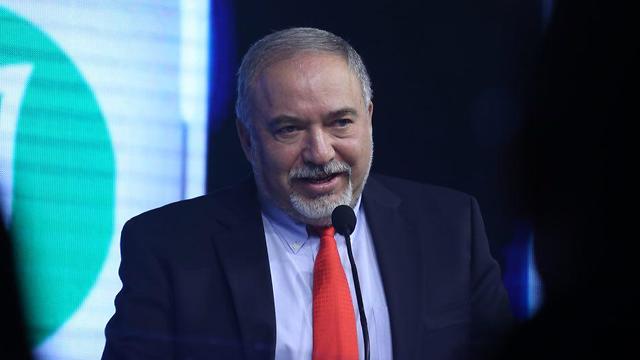 Defense minister vows to eliminate all terrorists behind Saturday explosive device attack on an IDF force, which left 4 soldiers wounded, saying 'Until we eliminate them, the score remains unsettled'; condition improves for one seriously wounded soldier.

Defense Minister Avigdor Lieberman said Sunday that the Popular Resistance Committees organization was behind the explosive device set off near an IDF force on Saturday on the Gaza border, which left four soldiers wounded.

"Until we eliminate them, the score remains unsettled. It will take two days, a week, or two weeks. We'll eliminate anyone behind the attack's execution," Lieberman told Ynet on Sunday morning.

Speaking about Israel's retaliatory moves in Gaza, the defense minister said, "We hit 18 terror targets, 18 quality targets, almost all of which belong to Hamas. This is perhaps the most significant and widespread strike we carried out since Operation Protective Edge. Hamas is the ruler, and we consider Hamas to be responsible for everything that is done in the Gaza Strip and from the Gaza Strip."

Saturday's events began when an IDF force patrolling the Gaza border went to check a suspicious flag put on the fence, which was attached to an explosive device remotely set off when the soldiers reached the fence.

In response, the IDF attacked an observation post near the site of the attack and then six Hamas targets all across the Gaza Strip, including an offensive tunnel running from the Zaytun neighborhood in Gaza towards Israel.

The situation escalated further when Gaza terrorists launched a rocket at Israel that hit the roof of a family in Shaar HaNegev. While the family was in the house at the time, the rocket hit the roof and failed to explode, and so none of the family members was hurt.

Overnight, the IAF attacked additional targets, bringing the number of targets hit to 18.

"Hamas has an interest in eroding our steadfastness, it's dealing with it quite a bit," Lieberman explained. "Hamas is trying to divide us and incite internal arguments within Israeli society. And the most important thing is that Hamas continues producing rockets, digging tunnels and developing smuggling routes. All it wants is to deter us from thwarting that smuggling activity, and we won't allow it."

The defense minister explained the IDF is not dealing with "rounds of fighting," but rather with "a persistent and ceaseless fight against terrorism, even when they are unsuccessful in carrying out attacks, and even when there aren't headlines in the media. The war on terror continues every day, every hour."

"This is a war we've been waging against Arab terrorism since the beginning of the 20th century. There's nothing new under the sun. And we're determined to fight and defeat terrorism and win, and definitely not give up," he added.

Meanwhile, the condition of one of the soldiers who was seriously wounded in the attack has improved. He has regained consciousness and is breathing on his own, and his condition has been changed to moderate.

The second seriously wounded soldier was still under anesthesia and on ventilator in the ICU at the Soroka Medical Center in Be'er Sheva. Two other soldiers remain in moderate condition.

The IDF is currently investigating the incident on the border fence on Saturday, looking into whether the soldiers could have acted differently. While the area is still cordoned off, there is no concern of additional explosives.