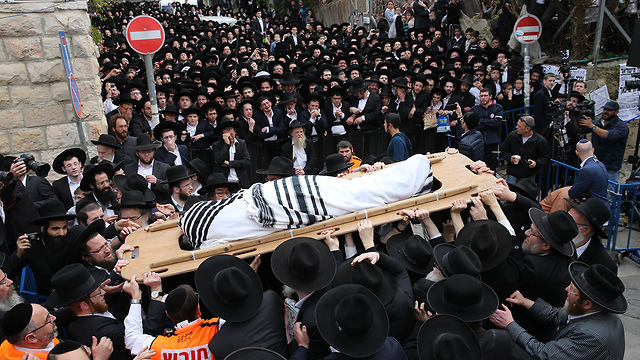 Crying and wailing, mourners and followers of leader of radical Jerusalem Faction sect pack Jerusalem's streets to escort his body, wrapped in a prayer shawl, to its final resting place at Har HaMenuchot Cemetery; 'We are facing a war of destruction. But the struggle is not lost,' says prominent sect rabbi in eulogy.

Thousands of people attending the funeral procession of Rabbi Shmuel Auerbach, the leader of the radical Jerusalem Faction of the Lithuanian ultra-Orthodox sect, who passed away over the weekend, were told during one of the eulogies that they are facing a "war of destruction" and must "happily" choose prison over drafting into the IDF.

Addressing the crowds of mourners before they carried Rabbi Auerbach's body to its final resting place in Jerusalem, Rabbi Tzvi Friedman, a prominent rabbi associated with the Jerusalem Faction, dedicated his eulogy to the public struggles waged by Auerbach.

“We are in a war of destruction. No man should turn up (to the IDF recruitment office). Don’t be scared of the police. Go to prison happily. They can fill the prisons. It won’t help them. He single-handedly directed the struggle while facing ridicule from others,” Friedman said.

“When the problem recently began with the drafting of women, he was already broken," signaling that the sect intends to continue to wage its campaign against mandatory conscription.

"All the haters from all sides should not delude themselves into thinking that the battle is lost. It will continue with full rigor. All the chatter of the politicians is all nonsense. He was able to stand up to the drafting of men, but drafting women broke him,” he added.

“He was a humble and quiet man, but he had the power of truth without bearing a grudge. The truth cannot be enforced. We didn’t understand how this quiet man could do such things. Some thought that he didn’t understand, but he was Mordecai the Jew, who knew everything that was done,” he said.

(Photo: Amit Shabi)
Auerbach’s followers carried his body, wrapped in a black and white prayer shawl laid on an austere wooden stretcher, through HaGra, KKL, Sderot Ben Tsvi, Sderot Weizman, Ussishkin, Bezalel and Sakharov as they brought him to be buried at the Har HaMenuchot Cemetery, the largest in Jerusalem. The streets were closed by police during procession.

Rabbi Auerbach’s body was marched from his home in the Sha'arei Hesed neighborhood of Jerusalem to the Ma'alot HaTorah yeshiva—which he headed—in the neighborhood before eulogies were read out. Hundreds of policemen were deployed across the planned route toward his final resting place.

Entrance to the city was closed via Highway 1 from 11:30 am until the funeral’s conclusion.

Moreover, the police announced that private vehicles will not be permitted to enter the site and therefore called upon members of the public to use public transport.

(Photo: Ohad Zwigenberg)
In an effort to avoid a recurrence of the chaos that has characterized past funeral of revered rabbis, the police have also warned people against climbing fences, buildings, street signs, utility poles and rooftops.

“We will respond with zero tolerance against actions that can endanger people’s lives,” a police statement said, adding that attendants must distance themselves from the vehicle carrying Rabbi Auerbach’s body.

(Photo: EPA)
Auerbach, 86, died in his home in the Sha'arei Hesed neighborhood of Jerusalem after suffering a heart attack. He was evacuated to the city’s Shaare Zedek Medical Center, where he was pronounced dead. Rabbi Auerbach led his group's aggressive struggle against the enlistment of yeshiva students into the IDF and the arrests of Haredi draft dodgers.

(Photo: Amit Shabi)
In recent years, Rabbi Auerbach has distinguished himself from the mainstream ultra-Orthodox sector mainly by means of an uncompromising fanatical battle against the "draft law." In the run up to the last Knesset elections, he called on the ultra-Orthodox to refrain from voting, as opposed to in previous elections.

He objected to any negotiations between representatives of the sector and the Shaked Committee for Equal Sharing of the Burden, objected to their pragmatic approach on enlistment, and ordered yeshiva students not to report to the conscription offices at all—nor to seek deferment of their IDF service.

As a result, several of them were arrested, which prompted thousands of Haredim across the country to hold violent demonstrations in Jerusalem, Bnei Brak, Beit Shemesh, Safed and Modi'in for several days in a row, blocking traffic and clashing violently with both police and drivers.