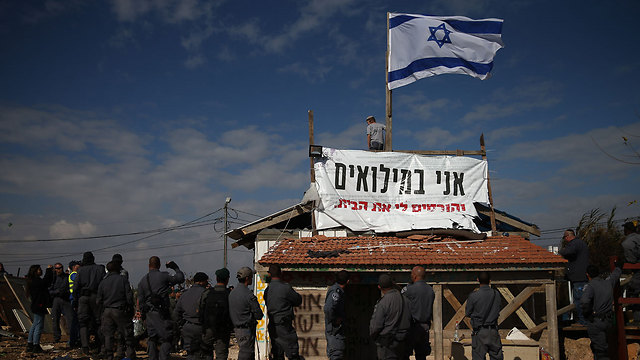 The government unanimously approved Sunday a building plan for the Netiv Ha’avot neighborhood in the West Bank, which will include the allocation of funds for the construction of 350 new housing units.

The decision comes as part of the government’s moves to regulate the Gush Etzion neighborhood, part of which was slated for evacuation next month in accordance with an order by the High Court of Justice (HCJ).

“Today, the Cabinet will approve a budget for the Netiv Ha'avot outline. The residents of Netiv Ha'avot have been waiting for a long time for this,” Prime Minister Benjamin Netanyahu said in his opening Cabinet meeting remarks.

“I would like to thank my colleague, Finance Minister Moshe Kahlon, for the joint work, especially with two people, chief-of-staff Yoav Horowitz and Ronen Peretz from my office, they did outstanding work on both this matter and placing the first homes in the community of Amichai last week—this is a double blessing,” he added.

“The government has taken the correct and moral step by opting to regulate area 91,” he said in reference to the designated area for construction.

“Residents of Netiv Ha’avot fell victim to the appeals made by left-wing organizations. The HCJ decision was wrong and it is our duty to minimize, as much as possible, the problems that were created for the residents. For every home that is dismantled as a result of the appeals filed by left-wing organizations, a community will be established in accordance with the law that they will not be able to move.”

In recent months, the Justice Ministry and the Attorney General’s Office have been attempting to find a solution for the residents of Netiv Ha’avot. In the meantime, a plot was found for the future evacuees who will be allowed to move there for three years while they work to legalize the outpost.

In total, 17 structures were ordered to be evacuated by the HCJ, which would have constituted the largest evacuation since Amona last February.

Last November, Israeli security forces completed the first demolition in the Netiv Ha'avot neighborhood in the Elazar settlement Wednesday of a carpentry shop, after the HCJ ruled that it was built illegally on privately-owned Palestinian land.

The order was part of a larger injunction calling for the demolition of a total of 17 illegal structures from the Gush Etzion settlement by March 2018.