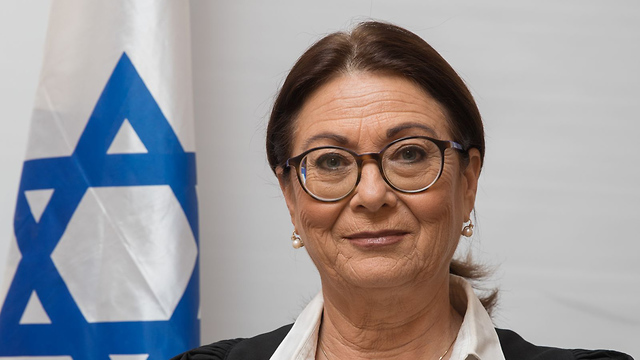 Supreme Court Chief Justice Esther Hayut on Sunday announced the appointment of a senior inquiry team to look into the relationship between prosecutors and judges discussing requests before the submission of indictments, following the recent exchange of text messages between a judge and an attorney in the Bezeq affair.

Hayut made the announcement following the failures revealed in as part of an inquiry conducted by former Justice Eliezer Rivlin, the ombudsman for complaints against Judges, into the conduct of Judge Ronit Poznanski-Katz, who corresponded with an Israel Securities Authority investigator on the remand hearings for Case 4000 suspects.

Supreme Court Chief Justice Esther Hayut. 'An opportunity to fix what needs fixing' (Photo: Courts website)
The team appointed by Hayut will be headed by Supreme Court Justice Yosef Elron, and its members will include Be'er Sheva District Court Judge Revital Yaffe Katz and Judge Einat Ron, who presides over the central region's magistrates' courts. The panel was asked to submit its recommendations by April 15.

Supreme Court Justice Yosef Elron, head of the inquiry panel (Photo: Gil Nehushtan)
In an email to the courts' presiding judges, Hayut wrote: "The ombudsman's decision on the systemic level and the circumstances that led to it call for a fundamental, deep and urgent examination. With all the difficulties we are experiencing these days, we have been given an opportunity as a system to fix what needs fixing and provide a proper transparent and professional response to any systemic failure that may be found, to maintain the public's faith in the courts."

Be'er Sheva District Court Judge Revital Yaffe Katz
In the correspondence between the judge and the attorney, held on the WhatsApp Messenger app, Shacham-Shavit is seen telling Poznanski-Katz that the prosecution will seek an extension of remand for Bezeq shareholder Shaul Elovitch wife and son, Iris and Or, the latter of which was a member in Bezeq's board of directors, Bezeq Strategy and Business Development Manager Amikam Shorer and Bezeq CEO Stella Handler, ahead of last Monday's hearing on the issue.

Judge Einat Ron (Photo: Courts website)
"Look surprised," he told the judge after informing her of the upcoming release of Or Elovitch and Shorer.

"I am starting to work on an appropriate expression of total surprise," she joked in response.

Shacham-Shavit then went on to reveal to her what the prosecution will ask of her in the coming hearing regarding the remand of Handler and Iris Elovitch.

"Stella and Iris—we will ask (to extend their remand) for a few days tomorrow. They'll ask for 3 days, but you can certainly give two," Shacham-Shavit wrote, to which she said, "you continue to reveal everything to me and I will have to look really surprised."

She later added that "perhaps the plan we thought about is not so far from reality."