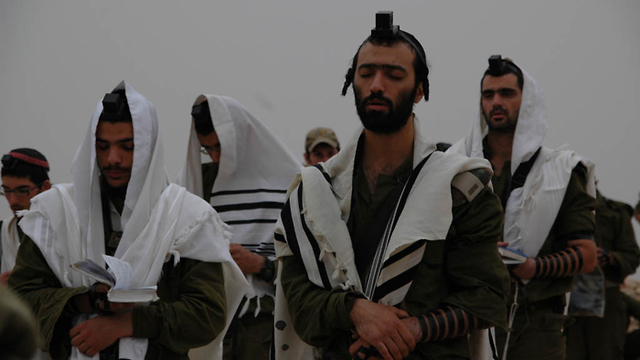 Encouraging IDF service through carrots rather than sticks

Op-ed: Israel doesn’t need more soldiers, but the Haredi integration process must be encouraged—and not through laws that won’t change anything because of political constraints. We must also create a new generation of Israeli Arabs who are interested in Israelization instead of in a Palestinian identity, in separatism and in supporting terror.

We’re afraid of looking the problem in the eye. This reality, in which only 50 percent of young Israelis enlist in the army, was dictated decades ago. David Ben-Gurion was the initiator, Menachem Begin was the accelerator, and all prime ministers since then have given it a hand and even a push.

As outrageous as it may be, there is no equality in rights and responsibilities in Israel.

Eventually, the integration process will be completed. The state can either encourage it or get in the way (Photo: IDF Spokesperson's Unit)

The place I live in sends children to the army and encourages them to serve in combat roles. Others don’t. There are groups in the population that encourage service in the home front. There are countless draft dodgers in the Left and in the Right. And there are two groups which the State of Israel has failed to deal with from the very beginning: The Haredim and the Arabs.

Let’s start with the immediate cause, because for some reason no one cares about the urgent problem—nationalism in the Arab society.

The Haredi society has been undergoing a revolution in recent years. About half of men go out to work. More and more people reach higher education, and then join the labor market. Thousands of Haredim enlist every year. The reason—mainly financial—isn’t all that important. The important thing is that, eventually, the integration process will be completed. The state has only two options in this context: To encourage or to get in the way.

There is no, and there will be no, political solution to the problem in light of our parliamentary system and the fear of making serious decisions. The Haredi representatives are driven by a fear to advance the integration in public, despite being the main representatives of that process.

Aryeh Deri and his people are part of Israeliness. Most of Shas’ representatives have served in the army, and so have many of their voters, but publicly afraid of urging IDF service in public. Yaakov Litzman is an Israeli of standing and influence in the Zionist state, even if he keeps saying three times a day that he’s a Ger Hasid who is just following his rabbi’s orders.

The scared Haredi representatives are faced by scared secular politicians. Since the Haredim tip the scales in every future coalition, no one—neither in the right nor in the left—will dare impose anything on them.

Deputy Health Minister Yaakov Litzman. Haredi politicians are driven by a fear to advance the integration in public, despite being the main representatives of that process (Photo: EPA)

The Bayit Yehudi members, who should know more than anyone else that Judaism has nothing to do with a refusal to enlist, are part of the game. Naftali Bennett has good relations with Litzman. A change won’t come from his direction.

Occasionally, a party comes along and puts a political spin on the Haredi draft issue, and then it joins the coalition and the whole business fades away. If Yair Lapid becomes prime minister, the Haredim will keep going, just like they did when his father sat in the coalition with them.

The solution must come in an indirect manner. And here, despite the differences, the Arab society fits in. A generous reward and benefits for anyone who serves in the army, especially a meaningful service, while expanding national service.

During Lapid’s term as finance minister, soldiers were offered a benefit basket. The offers were met with legal criticism about discrimination, although every democracy in the world does the same. In the United States, army veterans have been receiving benefits since 1944 (in 2009, President Barack Obama signed an executive order for the employment of veterans in the federal government), in France soldiers are eligible for a special pension, in South Africa they get preference in medical care and subsidized public transportation, in Australia they are eligible to home ownership assistance, etc.

In Israel, all the ideas to give soldiers a preference in jobs, wages or allotment of land have been foolishly dropped because “it’s discrimination.”

After the benefits, the national service option should be expanded. ZAKA, United Hatzalah, soup kitchens—any charity activity, which the Haredi society excels in, can be regulated. The hours can be fixed by law, alongside yeshiva studies. The same applies to the Arab society: In the fire and rescue services, in the police or as teaching assistants in schools.

Israel doesn’t need more soldiers, but it must encourage the Haredi integration process—not through laws that won’t change anything because of political constraints, but through carrots. Moreover, Israel must create a new generation of Israeli Arabs who define themselves that way and are interested in Israelization rather than in a Palestinian identity, in separatism and in supporting terror.