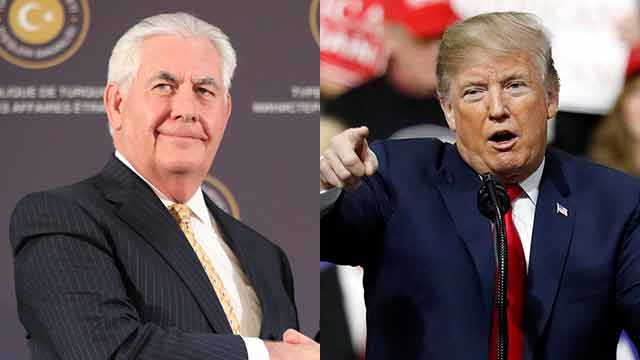 President Trump appoints CIA director Mike Pompeo as the next secretary of state, while Pompeo's deputy Gina Haspel will head the intelligence agency, 'the first woman so chosen.' Trump said to be interested in a new team in place ahead of potential upcoming talks with North Korea and various trade talks.

WASHINGTON - US President Donald Trump on Tuesday said he had replaced US Secretary of State Rex Tillerson with Central Intelligence Agency Director Mike Pompeo, and had tapped Gina Haspel to lead the CIA.

The resignation represents the biggest shakeup of the Trump Cabinet so far and had been expected since last October when reports surfaced about a falling out between Trump and Tillerson, 65, who left his position as chief executive of Exxon Mobil to join the administration.

Speaking to reporters at the White House shortly before departing for Joint Base Andrews for his trip to California, Trump said he made the decision to oust Tillerson "by myself," adding that Tillerson will be "much happier now," and he appreciates his service.

Trump said he and Tillerson had been "talking about this for a long time," and they had disagreed on issues like the Iran deal.

There had been longstanding rumors throughout most of Tillerson's tenure of friction between Trump and his secretary of state, a former Exxon Mobile Corp. CEO.

In October, NBC news reported that Tillerson called the president a "moron," something Tillerson never actually denied. Tillerson continued to insist his relationship with the president was solid and brushed off rumors of strain between them.

Tillerson had just returned from a shortened trip to Africa hours before Trump's announcement. Trump offered no explanation for the change.

Trump publicly undercut Tillerson's diplomatic initiatives numerous times, including on Monday when the former secretary of state's comments about Russia appeared to be at odds with those of the White House.

Trump and Tillerson, who had no diplomatic or political experience before becoming secretary of state, have diverged on policy numerous times, including over North Korea and Russia. On Monday, Tillerson sharply criticized Russia over the poisonings in England of a former spy and his daughter, directly blaming Moscow after White House press secretary Sarah Sanders stopped short of doing so.

Tillerson also appeared out of the loop last week when Trump announced he would meet with North Korea's leader and become the first sitting US president to do so.

A senior White House official said Trump asked Tillerson to step down on Friday but did want not to announce it while he was on a trip to Africa.

The official said Trump works well with Pompeo, a former congressman from Kansas who is seen as a loyalist within the administration, and wanted to have a new team in place ahead of upcoming talks with North Korea and various trade talks. The official spoke on condition of anonymity because the official was not authorized to speak publicly.

UN Ambassador Nikki Haley hailed Pompeo as a "great decision" for next secretary of state.

Haley, who had her own contentious relationship with Tillerson, congratulated Pompeo in a tweet and called him her "friend."

Over months of speculation about Tillerson's future, Haley had been rumored as one possible successor.