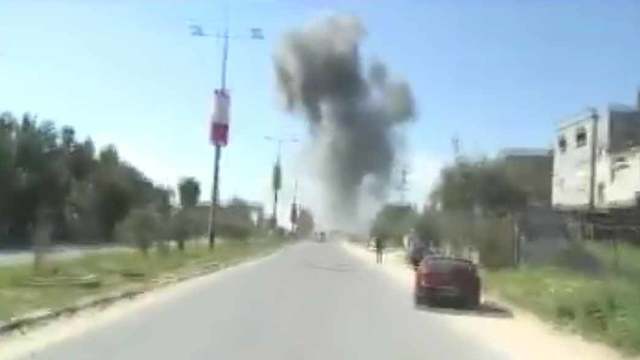 Gaza's Hamas rulers have shut the offices of a Qatari-Palestinian cellular provider in connection with its investigation into an explosion that targeted the visiting Palestinian prime minister.

Hamas police spokesman Ayman Batniji said Saturday that Wataniya Mobile, a subsidiary of Qatar's Ooredoo, was being closed down for "refusing to cooperate" in the inquiry.

Footage of the explosion's aftermath
X

A Palestinian source familiar with the details of the investigation told Ynet noted that the probe found that the terrorists used the lines of Palestinian cellular communications companies Wataniya Mobile and Jawwal to carry out the attack—apparently using a mobile phone to activate the explosive charges.

Initially, a roadside bomb struck a convoy carrying Prime Minister Rami Hamdallah earlier this week after he crossed into Gaza from Israel, wounding some of his bodyguards. Local reports say a second bomb that failed to detonate contained a Wataniya SIM card.

Hamdallah's West Bank-based Palestinian Authority held Hamas responsible for the attack. Hamas, which overthrew PA forces in 2007 to seize control of Gaza, rejected the accusation and appears to be looking to shift blame to others.

Details of the failed hit led to the conclusion that a technical failure prevented a second explosive device from exploding. According to reports, the weight of each of the two charges was 15 kilograms, and they were placed 40 meters apart.

One of the vehicles in the convoy rocked by the explosion

Palestinian PM Hamdallah said in the wake of the explosion that it 'will not deter us from seeking to end the bitter split' with Hamas (Photo: Reuters)

An explosive device operated by a timer wasp purportedly planted on the bottom of a light post on the side of the road. Several security guards were wounded in the explosion.

Minutes after the blast, Hamdallah, appearing unhurt, delivered a speech at an inauguration of a new sewage purification facility in the northern Gaza Strip, stressing the attack "will not deter (us—ed) from seeking to end the bitter split" and that Fatah will continue coming to the strip to try to end divisions with Hamas.