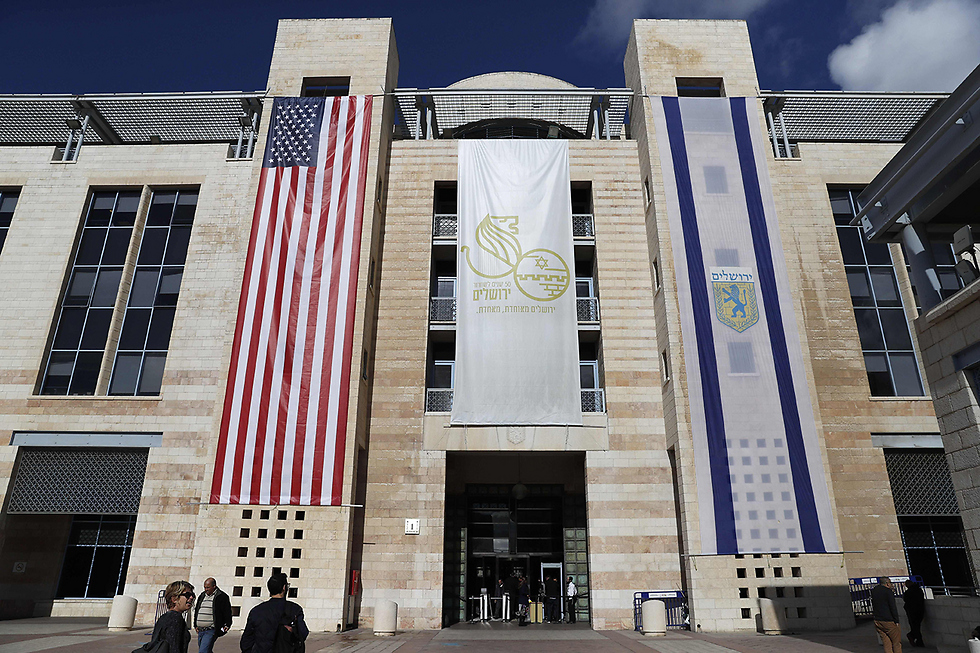 National Planning and Building Council recommends expediting construction permits to enable temporary quarters for embassy to open as planned in May. 'We will not allow needless bureaucracy to hold up the transfer of the American embassy to Jerusalem, Israel’s eternal capital,' Finance Minister Kahlon says.

Israel has expedited construction permits to enable temporary quarters for the US embassy to open in Jerusalem as planned in May, the Finance Ministry said on Tuesday.

The move was made at Finance Minister Moshe Kahlon's request, to prevent a delay in the embassy's move from Tel Aviv to Jerusalem. Kahlon is expected to sign the order in the coming days.

US President Donald Trump in December broke with other world powers by recognizing Jerusalem as Israel’s capital and announcing the US embassy would be moved there from Tel Aviv.

Trump’s reversal of decades of US and broad international policy was welcomed by Prime Minister Benjamin Netanyahu as a “historic decision." But it drew criticism from around the world and outraged Palestinians, who want a capital for their own future state in eastern parts of the city.

Israel has said the embassy will be opened on May 14, the 70th anniversary of its founding. A US official said it would be located at a provisional site in Jerusalem that now houses a US consular section.

Finance Minister Kahlon said in a statement that he would empower the Jerusalem Municipality to waive the permits that would have been required for a wall and an escape route at the interim site.

“We will not allow needless bureaucracy to hold up the transfer of the American embassy to Jerusalem, Israel’s eternal capital,” Kahlon said.

“This is a strategic diplomatic move for the State of Israel and the planning agencies under me will do whatever is necessary to accommodate the schedule being demanded.”

Jerusalem Mayor Nir Barkat had voiced concern about the timeline, telling Israel Radio on March 9: “I hope their (Americans’) schedule will be kept.”

The Israeli planning permit waiver for the embassy will be good for three years, the Finance Ministry statement said.

“Initially, the interim Embassy in (the Jerusalem neighborhood of) Arnona will contain office space for the ambassador and a small staff,” said a US embassy official in Tel Aviv.

“By the end of next year, we intend to open a new embassy Jerusalem annex on the Arnona compound that will provide the ambassador and his team with expanded interim office space,” he said, adding that a search for site for the construction of a permanent embassy had begun.

The National Planning and Building Council, led by Dalit Zilber, head of the Planning Administration, decided to recommend the move to the finance minister after being presented with "the importance and national urgency in completing the required security arrangements until the US embassy's move to Jerusalem, as announced by the US president.

"In light of the need to adjust the existing compound to the security requirements of a compound serving as the ambassador's office, and because these adjustments must be completed till the date of the move, the council decided to recommend the said exemption."

Most countries do not recognize either side’s sovereignty in Jerusalem and have embassies to Israel in the Tel Aviv area.

Netanyahu has described Jerusalem as “the capital of the Jewish people for 3,000 years”, and Trump said the embassy move was “a long overdue step to advance the peace process."

Palestinian leaders said Washington’s decision meant it was no longer an honest broker in efforts to revive peace talks, which collapsed in 2014.