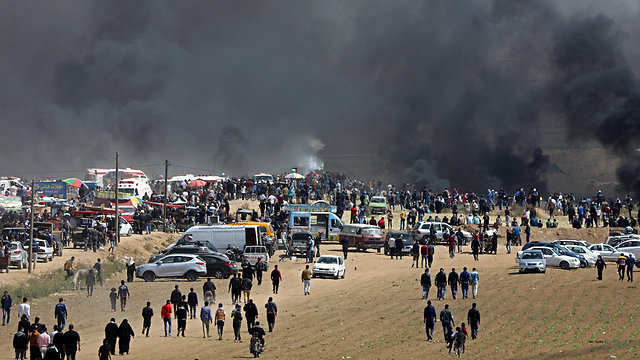 For now, Palestinians are winning war of public opinion

Op-ed: It may be time to come up with a new strategy concerning Gaza that will include not only a security-aggressive response, but also an economic-social-diplomatic response. Whether we like it or not, Gaza is our problem, and the Israeli interest requires us to think outside the security box.

Five more rounds of clashes, demonstrations and protests are expected near the Gaza border fence in the weeks leading up to May 15.

After the “March of the Return” became the “tire-burning Friday,” a new gimmick is expected next week: The protestors plan to carry olive branches and flowers. Then they will look for other gimmicks, until the major demonstration marking Nakba Day (the catastrophe) and protesting the American embassy’s move to Jerusalem.

“We want to live like humans” is the message conveyed by the common Gazan rsident, who understands that the protests and heavy price of casualties won’t change his diplomatic and political situation, but that at the end of the battle he may enjoy a few more hours a day of power supply, better drinking water and perhaps a flow of funds that will provide a glimmer of hope for economic development. As Gaza deteriorates to a social-economic collapse, such an achievement could provide a time-out.

Thinking that the Palestinians will be worn out after Nakba Day is an illusion (Photo: EPA)

As far as the IDF is concerned, in the balance of power vis-à-vis the Palestinians, the protests are a tactical problem, a security nuisance. This isn’t a security threat, and any sensible person knows this isn’t a military confrontation but a conscious battle, aimed at bringing the suffocating siege on Gaza to an end. The fence protest is an outcry which isn’t directed at Israel alone, but also at Palestinian Authority President Mahmoud Abbas, at the United States, at Egypt, at the entire Arab world. The Gazans feel they have nothing to lose.

The battle for public opinion depends on the military response to the protests, and it’s a shame the IDF is using aggressive measures which have left 32 people dead and hundreds wounded so far. These numbers could rise in the coming weeks and have ndamaging consequences on public opinion and lead to international protests.

No one questions the need to prevent the protestors from crossing the fence, but where is the Israeli sophistication? In the first intifada, they invented “Hatzatzit,” a crowd dispersal tool capable of hurling stones at distances of hundreds of meters; in the anti-fence protests in Bil’in, they invented a device that produces horrible shrieks to drive away the protestors. Then they invented the "skunk" water, whose strong odor helped disperse protests easily. If there are no other patents, why don’t they bring these devices out of the warehouses?

Ridiculous diplomatic activities—like the appeal made by the coordinator of government activities in the territories to the head of the World Health Organization over the tire burning, which might cause “an ecological catastrophe that would harm the health of the residents and will cause unprecedented air pollution,” or the Israeli ambassador’s appeal to the United Nations Security Council secretary-general over Hamas’ use of women and children in the protests—fail to create a battle over public opinion in the international arena. The announcement that tires won’t be allowed into the strip is another petty and childish move. Maybe next week they’ll decide to ban the entry of flowers into Gaza.

Israel knows how to produce power. In the battle over public opinion, the Palestinians are winning.

No one questions the need to prevent the protestors from crossing the fence, but where is the Israeli sophistication? (Photo: AFP)

It may be time, with the Israeli interest in mind, to come up with a new strategy concerning Gaza that will include not only a security-aggressive response, but also an economic-social-diplomatic response. Such a strategic plan must be carried out in cooperation with the Arab states (and we have a window of opportunity at this time), with the Western states and with the UN and its institutions.

Until then, we can launch rapid temporary activities, like placing a power plant ship off the shores of Gaza to provide electricity. There has been such an initiative, which wasn’t approved by Israel. In Hamas’ current situation, there will be no objection or disruption of economic plans of this kind.

Fences, underground and aboveground walls, tunnels, snipers, tanks and aerial bombardments, force and more force—all this creates a tactical security response. Thinking that the Palestinians will be worn out after Nakba Day is an illusion. Israel disengaged from Gaza; Gaza didn’t disengage from us. Whether we like it or not, it’s our problem, and the Israeli interest requires us to think outside the security box.

Dr. Ronni Shaked is a research fellow at the Harry S. Truman Research Institute for the Advancement of Peace at Hebrew University.