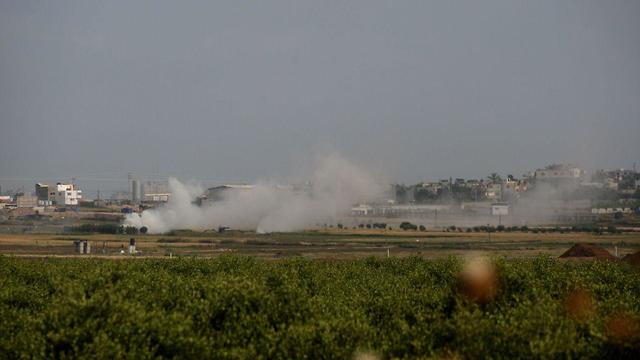 Hamas targets attacked after explosive device detonated against Caterpillar D9 bulldozer during routine activity near border; no injuries or damage reported. 'We won't allow the terror organization to turn the fence area into a conflict zone,' IDF says in response.

An explosive device was set off Wednesday morning near an IDF force on the Gaza border, east of Sujjaiya, in the area near the Karni Crossing. There were no reports of injuries.

The explosive device was detonated against a Caterpillar D9 bulldozer which was on routine activity on the Israeli side of the fence. There was no damage, the army said, and the force wasn't fired on.

"A number of targets belonging to the Hamas terror organization were attacked," the IDF said in a statement. "The IDF sees Hamas as responsible for any incident taking place in and from the strip and won't allow the terror organization to turn the fence area into a conflict zone."

Residents on both sides of the border reported hearing bursts of gunfire and tank shell explosions. Despite the incident, residents and farmers in the Gaza vicinity area have been given no special instructions.

"There was a huge blast," one of the farmers told Ynet. I was sitting in my office and all the windows trembled. It was unusual."

Apart from the infiltration of Palestinians through the fence, this was the most significant incident to take place in southern Israel in recent days since the mass protests and tire-burning last Friday as part of the Palestinians' "March of Return" events.