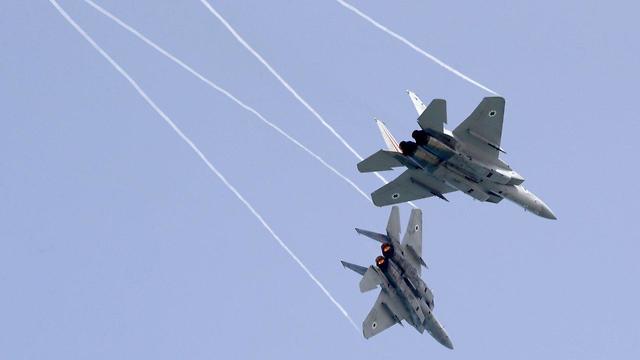 F-15s flew Thursday morning in the skies of Tel Aviv and other cities in central Israel, deploying flares, performing aerobatics and alarming residents with sonic booms on the backdrop of mounting tensions with Syria and Iran.

The flyover, done in preparation for planned aerial demonstration on Israel's 70th Independence Day, was not announced by the IDF Spokesperson Unit ahead of time, as is the norm.

F-15s in the aerial drill (Photo: AFP)
According to the police, many residents called the emergency services number to know the reason for the flyover. So many, in fact, that the police was forced to issue a public announcement to reassure the general public the jets were not deployed for operational activities.
The aerial drill    (צילום: זיו סוקולוב)
X

The exercise was scheduled in advance, and the IDF usually updates trainings or exercises that cause heavy movement of military equipment in public spaces. Earlier this week, Ynet contacted the IDF after residents of Tel Aviv noticed planes flying low over their homes, but the army did not clarify the circumstances of the flights.

In the wake of the Thursday morning panic, the IDF apologized and released the schedule for next week’s aerial practice fly-overs ahead of the Independence Day fly-over.

The schedule is as follows:

The IDF also said that there may be additional aerial training activity on Tuesday in Jerusalem and Tel Aviv between the hours of 10:45-11:45am.

The traditional aerial demonstration will also include aircrafts of foreign air forces this year. Representatives of the countries will arrive in Israel next week and take part in the 70th anniversary celebrations of the state alongside dozens of IDF planes, helicopters and ships.

(Photo: Motti Kimchi)
The demonstration will fly over over 49 cities and towns, from Kiryat Shmona to Eilat, with F-35, F-16, F-16I and the relatively new training plane, the M-346. Alongside these will be flying Apache helicopters, the CH-53 Sea Stallion and the UH-60 Black Hawk, and a variety of transport planes, from a Boeing 707-based refueling aircraft, the C-130 Hercules and the C-130J Super Hercules, to the B200 King Air and the Gulfstream V, which are mainly used in reconnaissance and intelligence missions.