Diplomatic pressure of the Israeli Ministry for Foreign Affairs caused the EU Parliament to significantly alter the motion for resolution submitted against Israel; final resolution corresponds with Israel's stance about Gaza and describes Hamas as a terror organization.

This resolution came as a result of a diplomatic campaign launched by the Israeli Ministry for Foreign Affairs against the original anti-Israel motion for resolution.

The original motion for resolution included severe condemnation against Israel, as well as a request for investigation at the International Criminal Court of Justice in Hague, determination that the IDF didn't use proportional force, a call to reexamine Israel's ties in the EU and an immediate establishment of a EU investigation committee to review latest events in Gaza.

The resolution was completely altered and many provisions were added which unusually correspond with the Israeli stand regarding Gaza.

According to the resolution adopted today, Israel is still condemned for shooting Gaza's citizens and is called to end the siege, however, the use of disproportional force was not determined. In the resolution, the European Parliament, housed in Strasbourg, France, called for an investigation, but added it will be executed by a special team assembled by its Chief of Staff.

The remaining provisions in the original notion for resolution were left out. However, the resolution calls for the immediate release of Avera Mangistu and Hisham al-Sayed and for the retrieve of the bodies of Hadar Goldin and Oron Shaul.

The resolution also emphasizes that Hamas is a terror organization who transformed Gaza into an enclave focused on terror, withholds basic rights from its citizens, prevents the strip's rehabilitation and continues to hinder the chance for reconciliation. It holds Hamas accountable for the assassination attempt of the Palestinian Prime Minister Rami Hamdallah and condemns the organization for acts of terror, rocket fire, infiltration attempts into Israel, tunnel diggings and use of citizens as human shields.

Moreover, the resolution determines that despite the Palestinians' right to peaceful protests, the Gaza's leaders must avoid incitement and ensure demonstrations wouldn't be used for spreading terror.

Israel's ambassador to the EU and NATO Aaron Lashno-Ya'ar expressed his content regarding the resolution. "Not only have we managed to extract outrageous and anti-Israeli elements from the resolution, but Hamas is also being criticized. The most important element for us is the explicit call for an immediate release of the Israeli citizen and the soldier's bodies from Gaza." 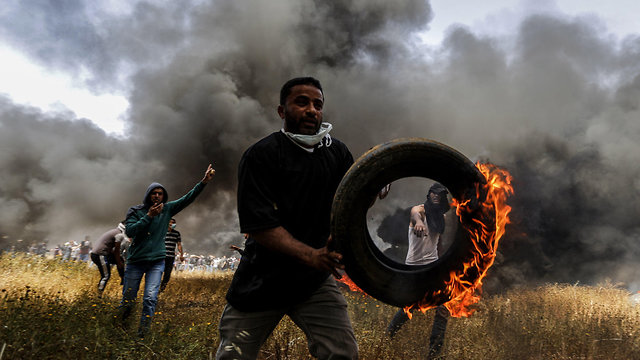 "The latter is a matter we continually raise to discussion with European bodies. It's important that finally, for the first time, the European Parliament released a clear and unequivocal resolution regarding this matter," he added.

Deputy Chairman of the Foreign Affairs committee of the European Parliament Andres Wistesen said in a message to the press that he welcomes the decision, reiterating the parliament's stance that that "Hamas is a terror organization" and called for the release of the Israeli citizens and return of the bodies held by it.

"Despite the resolution is not without flaws and that leftists continue in their struggle to blur the reality in Gaza, I'm pleased that the parliament's European Conservatives and Reformists group tirelessly acts to make the voice of reason heard," added Wistesen, taking the opportunity to congratulate Israel on its 70th Independence Day.