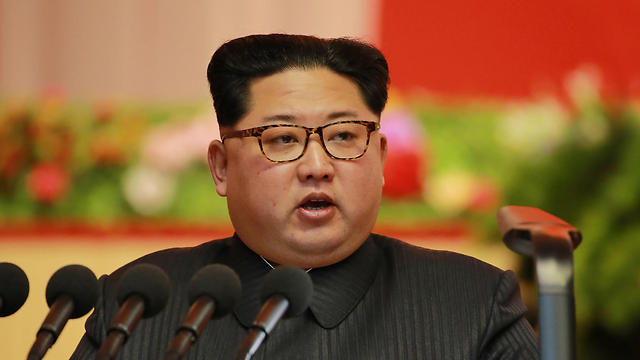 North says completed its goal of developing nuclear weapons and will now 'concentrate all efforts on building a powerful socialist economy and markedly improving standard of living'; experts say announcing concessions now, rather than during summit meetings with US and South, shows Kim is serious about denuclearization talks.

SEOUL - North Korea will immediately suspend nuclear and missile tests and scrap its nuclear test site and instead pursue economic growth and peace, the North's state media said on Saturday, ahead of planned summits with South Korea and the United States.

North Korean leader Kim Jong Un said his country no longer needed to conduct nuclear tests or intercontinental ballistic missile tests because it had completed its goal of developing nuclear weapons, the Korean Central News Agency (KCNA) said. North Korea said that to create an "international environment favorable" for its economy, it would "facilitate close contact and active dialogue" with neighboring countries and the international community.

North Korean leader Kim Jong Un (Photo: AFP)
It was the first time Kim directly addressed his position on North Korea's nuclear weapons programs ahead of planned summits with South Korean President Moon Jae-in next week and with US President Donald Trump in late May or early June. The pledge to halt the development of nuclear weapons, initiated by his grandfather and continued by his father, would mean a significant reversal for the young, third-generation leader, now 34, who has staked his security on his nuclear arsenal and spent years celebrating such weapons as an integral part of his regime's legitimacy and power. A testing freeze and commitment to close a test site alone would fall short of Washington's demand that Pyongyang completely dismantle all of its nuclear weapons and missiles. But announcing the concessions now, rather than during summit meetings, shows Kim is serious about denuclearization talks, experts say. "The northern nuclear test ground of the DPRK will be dismantled to transparently guarantee the discontinuance of the nuclear test," KCNA said after Kim convened a plenary session of the Central Committee of the ruling Worker's Party on Friday.

Kim presides over plenary session of the Central Committee of the ruling Worker's Party (Photo: Reuters)
The North's official name is the Democratic People's Republic of Korea (DPRK). The Pyunggye-ri site in northern North Korea is its only known nuclear test site, where all of its six underground tests were conducted, including the last, its largest-ever detonation, in September. "We will concentrate all efforts on building a powerful socialist economy and markedly improving the standard of people's living through the mobilization of all human and material resources of the country," KCNA said.

North Korean state television announces suspension of nuclear tests
Trump welcomed the statement and said he looked forward to a summit with Kim. "North Korea has agreed to suspend all Nuclear Tests and close up a major test site. This is very good news for North Korea and the World - big progress! Look forward to our Summit," Trump said on Twitter. "Progress being made for all!" he said in a later tweet.

US President Donald Trump (Photo: MCT)
South Korea said the North's decision signified "meaningful" progress toward denuclearization of the Korean peninsula and would create favorable conditions for successful meetings with it and the United States. Japanese Prime Minister Shinzo Abe said he welcomed North Korea's statement but it must lead to verifiable denuclearization. "This announcement is forward motion that I'd like to welcome," Abe told reporters. "But what's important is that this leads to complete, verifiable denuclearization. I want to emphasise this." The United States, Japan and South Korea have historically been the main targets of North Korea's anger. "We're all looking for evidence that Kim is really serious about negotiations, and announcements like this certainly suggest he is, and that he is trying to make clear to the world that he is," said David Wright, co-director of the Global Security Program at the Union of Concerned Scientists.

North Korea has said its nuclear and missile programs are necessary deterrents against US hostility. It has conducted numerous missile tests with the aim of being able to hit the United States with a nuclear bomb. The tests and escalating rhetoric between Trump and Kim raised fears of war until, in a New Year's speech, the North Korean leader called for reduced military tensions. He sent a delegation to the Winter Olympics in the South in February, leading to warmer ties with the South.

Kim Yo-jong, the sister of the North Korean leader, attends the Winter Olympics in South Korea alongside US Vice President Mike Pence (Photo: EPA)
Nam Sung-wook, professor of North Korean Studies at Korea University in Seoul, said it was "sensational" that Kim had personally declared plans to suspend nuclear development, but added that his remarks left a number of questions. "It still does not seem clear if it means whether the North will just not pursue further development of its nuclear programs in the future, or whether they will completely shut down 'all' nuclear facilities. And what are they going to do with their existing nuclear weapons?" Nam said. South Korean President Moon said on Thursday North Korea had expressed a commitment to "complete denuclearization" of the Korean peninsula, and had not attached conditions, but Washington had remained wary and vowed to maintain "maximum pressure" on Pyongyang. The United States said on Thursday that in the run-up to Trump's planned summit with Kim, countries should continue to put financial and diplomatic pressure on Pyongyang to surrender its banned nuclear weapons. Many US officials and experts doubt Kim's sincerity about denuclearizing, viewing the recent flurry of diplomacy as a ploy to win relief from economic sanctions.
North Korea tests ballistic missile in September 2017    (רויטרס)
X

UN Security Council sanctions imposed on North Korea after its first nuclear test in 2006 and extended over the past decade have aimed to deny it a considerable amount of international trade, banning critical exports such as coal, iron ore, seafood, textile while limiting oil imports. That has threatened the policy of "byungjin" - simultaneous military and economic development - that Kim Jong Un has adopted since taking power in late 2011. "Easing tensions and cooperating with the international community is critical if Kim wanted to advance the economy," said Cheong Seong-chang, a senior fellow at the Sejong Institute think-tank south of Seoul. Koh Yu-hwan, professor of North Korean Studies at Dongguk University in Seoul, said he did not believe Pyongyang was ready to give up its existing nuclear weapons and missiles. "Kim is just saying that now that the nuclear development is complete, he will put all the efforts toward building an economy," Koh said.