Mladenov next to a rioter at the Gaza border protest
Photo: AP, Reuters 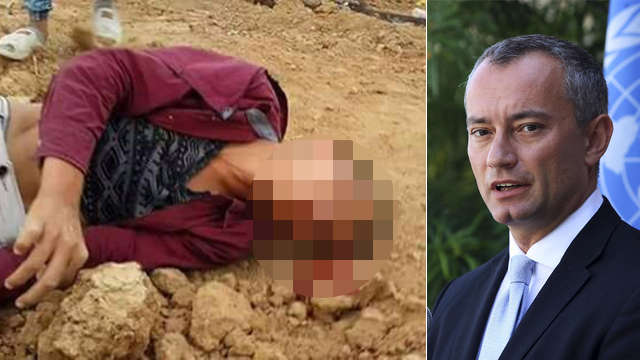 Following the shooting of a 15-year-old protester during Gaza border riots, UN Mid-East Special Coordinator Mladenov slams the IDF for the incident, calling it 'outrageous' and says it 'must be investigated.'

UN Special Coordinator for the Middle East Peace Process Nikolay Mladenov condemned Friday the IDF killing of a 15-year-old Palestinian that occurred earlier that day during a riot on the Gaza border, echoing UN Secretary-General Antonio Guterres by calling for an investigation of the "outrageous" incident.

“It is OUTRAGEOUS to shoot at children!” Mladenov fumed in a twitter post. “How does the killing of a child in Gaza today help peace? It doesn’t! It fuels anger and breeds more killing. Children must be protected from violence, not exposed to it, not killed! This tragic incident must be investigated.”

Mladenov next to the slain youth (Photo: AP)
According to the IDF, a sniper in the Israeli army is given authorization to shoot only from an officer at the level of a battalion commander or above. In such a case, they are permitted to open fire on a “central instigator,” aiming at his ankle or below his knee. Full data on each sniper fire is recorded in real time via the rifle's telescopic sights lens.

Gaza border riot (Photo: EPA)
In total, four Palestinians were shot dead by IDF troops on Friday morning during skirmishes with Israeli security forces on the Gaza border, according to Palestinian sources. The violence erupted following the renewal, for the fourth consecutive week, of the “March of Return” staged by the Palestinians in the coastal enclave in recent weeks, some 3,000 of whom have descended on the border.

(Photo: EPA)
The Gaza Health Ministry says 445 Palestinians have been wounded in protests on the Gaza-Israel border, including 96 who were wounded by Israeli army fire. The officials say that of those injured Friday, 174 were transferred to hospitals and 271 treated in field clinics. Some of the injured were overcome by tear gas, hit with rubber-coated steel pellets or hit by shrapnel.

(Photo: EPA)
Israeli soldiers deployed along the border in a bid to prevent or react to the outbreak of violence, with officials warning that the military will act against instigators and riot ringleaders. Ahead of the protests, the IDF dropped leaflets on Gaza on Friday morning, warning residents to refrain from approaching the border fence with Israel, and not to attempt to damage it or carry out terror attacks.

It is the first time that the IDF has dropped leaflets from the air on the Gaza Strip ahead of the mass demonstrations on the border warning against public disturbances.

“You are participating in violent disturbances. Hamas is using you to carry out terror attacks. The IDF is ready for any scenario,” the leaflets read, which also contained pictures of objects and weapons and actions which the military has forbidden in the protests.

(Photo: Reuters)
“Avoid approaching the fence and damaging it. Avoid using a weapon to carry out violent acts against the Israeli security forces and Israeli civilians. Keep away from terrorists and from people who promote disturbances and violence,” the leaflets instructed before warning that the army would not hesitate to respond.

“The IDF will act against any attempt to damage the barrier and its components and any other military equipment. Hamas is using you to promote its own interests of the movement. Do not obey Hamas’s instruction that endanger your lives. There is another way. Your future is in your hands.” it added.

Palestinians, in response, attached notes with messages to Israel on kites they built and sent carrying incendiary materials at the border.

"You have no place in Palestine," the notes read. "Go back to where you came from. Al-Quds (Jerusalem)—the capital of Palestine.