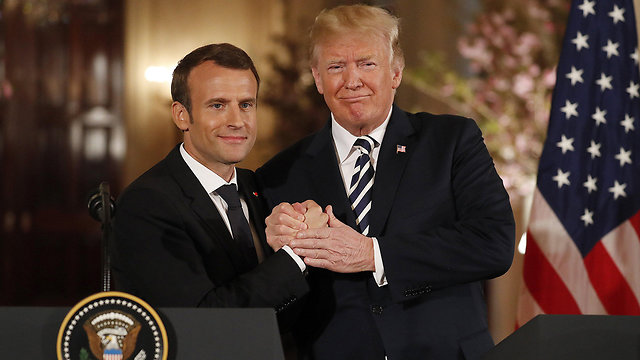 Analysis: The French president came to the White House to convince his American counterpart not to walk away from the agreement with Iran. As the May 12 deadline approaches, Macron will try to amend the agreement in a way that will satisfy Trump or get him to postpone his deadline.

The two leaders have managed to create a friendship and an alliance of interests, despite the age difference (Trump is 71 years old, Macron is 40). Macron credited it to their past, saying they are both “mavericks” who managed to beat the political system in their countries.

Trump and Macron. A warm meeting at the White House (Photo: EPA)

But Macron didn’t come to Washington merely to give Trump a hug in front of the cameras, an act which is going to cost him dearly among his voters in France, who despise the American president. He arrived on a mission—to convince Trump not to walk away from the nuclear agreement with Iran.

The moment of truth is approaching. On May 12, Trump will have to decide whether to sign a fresh waiver to suspend US sanctions on Iran. If he fails to sign, it will indicate that the United States is withdrawing from the agreement. If the US is no longer part of the agreement, Iran won’t feel obligated to comply with it either. Iran has already announced that it’s “all or nothing.” And that’s the purpose of Macron’s visit to Washington—to stop Trump.

It’s unclear whether Macron will accomplish his mission, but after the first day of meetings between the two leaders, it was evident that Macron had managed to charm Trump. The American president, who isn’t quick to commend anyone, neither friends nor leaders, showered his French counterpart with praise.

Throughout the entire day, Trump spoke in several different voices, which might imply that his firm stance in favor of withdrawing from the agreement at this time has been slightly undermined.

He began by defining the agreement as “insane” and “ridiculous” and saying it “should have never been made.”

Several hours later, he sounded more appeased, suggesting he was open to "doing something" on the Iran agreement and telling Macron in front of the cameras: "We could have at least an agreement among ourselves very quickly." When he was asked by a reporter what that agreement would be, he refused to elaborate, saying: "You'll find out."

That was before the official press conference with Macron, in which he conveyed a direct message to Iran. “If Iran threatens us in any way, they will pay a price like few countries have ever paid,” he warned.

Macron stood next to Trump and said he was willing to discuss “a new deal with Iran,” but he has no intention of withdrawing from the current agreement. Macron wants to return home, to France, with some sort of achievement in his hand, an achievement which Trump can provide him with: If Macron is able to say that he influenced the president’s stand, it will help him with his voters. Trump, for his part, will be able to say that threats managed to change the agreement.

Meanwhile, Macron isn’t planning to cancel the current agreement, but to add to it. In other words, to honor it until 2025, while adding clauses dealing with the Iranian presence in Syria and with its missile program. Macron will continue his US visit in this spirit when he addresses the two Houses of Congress.

The clock is ticking, and Trump has to make a decision by May 12. His close associates say the president is determined to walk away from the agreement, unless he is presented with a better alternative that meets his demands. Messages in this spirit have also been conveyed to Israel, which is applauding Trump for his decision to withdraw from the agreement.

Such a decision, however, would deepen the crisis between the US and the European Union. Experts in the American administration have also warned Trump against freeing Iran from its obligations. If that happens, they say, Iran will rush to resume its nuclear program, which was suspended after it signed the agreement.

There is absolutely no chance that Trump will announce that he is reneging on his decision to withdraw. That won’t happen. What could happen is that he will postpone the deadline. In other words, he will sign a waiver suspending the sanctions on Iran and will let Macron work to achieve agreements on his idea to expand the deal in the next few months.

For that to happen, Macron will have to convince all the parties that signed the agreement—including Iran—that it is in their best interest to do so. Trump will agree to postpone the deadline only if he receives conclusive proof that there is a willingness to expand the agreement. Macron, with all his goodwill, will likely be unable to provide such proof.

Trump is convinced that if he withdraws from the agreement, Iran will make dramatic mistakes and reactivate its nuclear facilities in full force, giving him just cause to strike in Iran. His new national security adviser, John Bolton, is an enthusiastic supporter of the military option against Tehran.

But there is another element in this game—Trump’s personality. The American president has earned a reputation of someone who is capable of making contradicting comments and doing the exact opposite of what he has promised to do.