Macron and Trump at the White House
Photo: Reuters 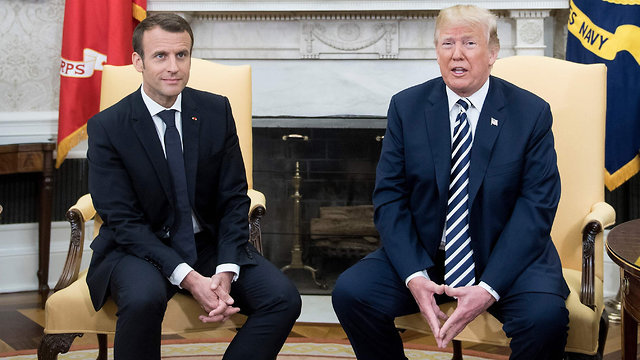 Trump: 'Iran will pay if it restarts nuclear program'

US President Donald Trump warned Iran on Tuesday not to follow through with threats to restart its nuclear program, as he and French President Emmanuel Macron struggled to find common ground on saving the 2015 Iran nuclear deal.

Weighing withdrawal from the Iran nuclear deal, President Donald Trump declared that if the Iranians "restart their nuclear program, they will have bigger problems than they've ever had before."

Trump issued his warning alongside French President Emmanuel Macron in the Oval Office, where the two allies were to discuss the multinational nuclear accord, the war in Syria and other issues during a day of meetings at the White House.

"You can mark it down, if they restart their nuclear program, they will have bigger problems than they've ever had before," Trump repeated. "Iran will pay if it restarts nuclear program."

Trump called the agreement a "terrible deal" that was "insane" and "ridiculous" because it did not deal with ballistic missiles or Iran's activities in conflicts in places like Yemen or Syria.

"We made this terrible deal but we're going to discuss it," he said. Under the deal, Iran agreed to curb its nuclear ambitions in return for relief from economic sanctions.

One of Macron's main objectives during his three-day visit to Washington is to persuade Trump to stay in the deal. Trump remains publicly undecided but reminded his French counterpart of what he sees as flaws in the agreement.

Macron told reporters that he and Trump would look at the Iran deal "in a wider regional context," taking into account the situation in Syria. "We have a common objective, we want to make sure there's no escalation and no nuclear proliferation in the region. We now need to find the right path forward," Macron said.

Trump suggested he was open to "doing something" on the Iran agreement as long as it was done "strongly." He told Macron, "We could have at least an agreement among ourselves very quickly." But when he was asked by reporters what that agreement would be, Trump said, "You'll find out."

For all their camaraderie, Macron and Trump disagree on some fundamental issues, including the multinational nuclear deal, which is aimed at restricting Iran's development of nuclear weapons.

Trump, skeptical of the pact's effectiveness, has been eager to pull out as a May 12 deadline nears. Macron says he is not satisfied with the situation in Iran and thinks the agreement is imperfect, but he has argued for the US sticking with the deal on the grounds that there is not yet a "Plan B."

Iran has said it will ramp up its nuclear program if the deal collapses and a senior Iranian official said on Tuesday that Tehran might quit a treaty designed to stop the spread of nuclear weapons if Trump scraps the agreement. Tehran says its nuclear program is only for peaceful means.

Russia's arms control envoy Vladimir Yermakov told a UN non-proliferation conference in Geneva that the Iran deal, known as the JCPOA, was fragile and any attempt to amend it would affect the global non-proliferation regime.

"We call upon our colleagues in this hall today not to remain silent in hopes that this situation will somehow blow over by itself but rather to take serious steps to preserve the JCPOA," Yermakov said.

The Chinese-Russian draft text asks states to "confirm their unwavering support for the comprehensive and effective implementation" of the JCPOA, and to recognize its significant contribution to international security.

Yermakov told Reuters he was hopeful of getting the backing of all major states at the end of the two week conference, including Washington's allies in Europe who have voiced their support for the JCPOA.

He also expected North Korea to give its backing, and said the fate of the Iran deal was a key factor in upcoming talks on North Korea's nuclear programs.

Shortly after Yermakov, Japanese Foreign Minister Taro Kono took the floor and added his voice to those supporting the JCPOA, saying it contributed to the global non-proliferation regime.

Iran warns Trump it might withdraw from Non-Proliferation Treaty

A senior Iranian official said on Tuesday that Tehran might quit a treaty designed to stop the spread of nuclear weapons if US President Donald Trump scraps the nuclear accord Iran signed with world powers in 2015.

The other powers that signed it—Russia, China, Germany, Britain and France—have all said they want to preserve the agreement that curbed Iran's nuclear program in return for the lifting of most international sanctions.

In a news conference broadcast on state television, the secretary of Iran's Supreme National Security Council, Ali Shamkhani, said the Atomic Energy Organization of Iran was ready for some "surprising actions" if the nuclear deal was scrapped.

Answering a question about the possibility of Tehran withdrawing from the Nuclear Non-Proliferation Treaty (NPT), Shamkhani said: "This is one of three options that we are considering."

Hassan Rouhani says consequences to be severe if deal is betrayed (Photo: EPA)

"I am telling those in the White House that if they do not live up to their commitments the Iranian government will firmly react," Rouhani said in a speech.

"If anyone betrays the deal, they should know that they would face severe consequences," he told a cheering crowd of thousands gathered in the city of Tabriz. "Iran is prepared for all possible situations," he added.