The stabbing near Jerusalem's Hadar Mall 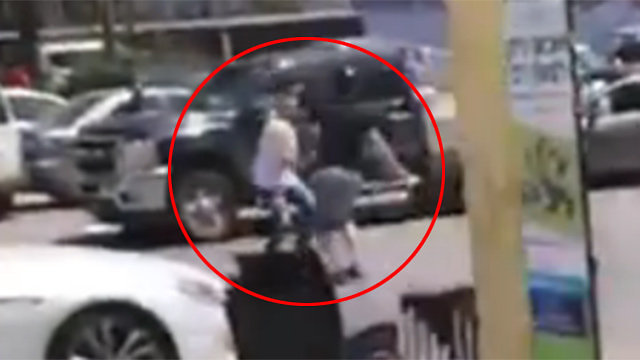 Video footage published on Sunday evening shows the incident that took place earlier involving a man in his thirties being stabbed near Jerusalem's Hadar Mall in the Talpiot neighborhood, before the assailant attempts to escape as police fire a gun at the suspect.

The stabber suffered moderate wounds and was taken to the capital's Shaare Zedek Medical Center. Despite initial fears that the incident was a terror atatck, police said the stabbing was in fact a criminal assassination attempt, with the victim being a high ranking member of a local crime family while the stabber was also a career criminal.

The hit as captured on film
X

The hit as captured on film

The video showed a man wearing a dark shirt walking up to a man in a white shirt standing on a sidewalk near the road. After stabbing him, the perpetrator escapes and a nearby officer shoots him.

The moment of stabbing as captured in the video footage

An eyewitness said that she saw one man shooting another, at which point a vehicle drove over the prone man who was shot.

The scene of the attack
Magen David Adom paramedic Uri Cohen recounted the scenes of the attack. "When we arrived on the scene we saw two casualties near the mall's entrance. A man of about 35 was lying conscious on the road suffering from gunshot wounds to the limbs while a man of about 30 was lying on a nearby sidewalk somewhat dazes and suffering from stab wounds to the upper torso." "We performed life-saving first aid medical treatment at he scene to both of them, which included stopping life-threatening bleeding, and took them to hospital," he added.