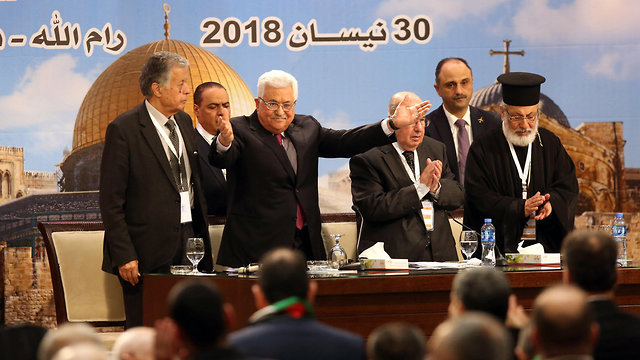 'Such rhetoric will only play into the hands of those who do not want a two-state solution,' the European External Action Service says in statement after PM Netanyahu called on international community to denounce the PA leader's anti-Semitic comments.

In strikingly blunt language from Brussels, the European External Action Service said in a statement: "The speech Palestinian President Mahmoud Abbas delivered on 30 April contained unacceptable remarks concerning the origins of the Holocaust and Israel's legitimacy.

"Such rhetoric will only play into the hands of those who do not want a two-state solution, which President Abbas has repeatedly advocated."

Netanyahu called for international condemnation of anti-Semitism by Abbas over remarks on Monday in which the Palestinian leader suggested historic persecution of Jews in Europe was caused by their conduct.

"With utmost ignorance and brazen gall, (Abbas) claimed that European Jews were persecuted and murdered not because they were Jews but because they gave loans with interest," Netanyahu said. "Abbas is once again reciting the most contemptible anti-Semitic canards. Apparently the Holocaust-denier is still a Holocaust-denier."

The EEAS added: "Anti-Semitism is not only a threat for Jews but a fundamental menace to our open and liberal societies.

"The European Union remains committed to combat any form of anti-Semitism and any attempt to condone, justify or grossly trivialize the Holocaust."

In his speech Monday, the Palestinian leader repeated conspiracy theories about the Jews' origins and their ties to the land of Israel.

"The Jewish question that was widespread throughout Europe was not against their religion, but against their social function, which relates to usury and banking and such," Abbas said on Monday.

He claimed Nazi leader Adolf Hitler offered the Jews money incentives to emigrate out of Europe to Palestine, including the option of taking all of their assets with them and selling their real state in the continent.

"He (Hitler) wanted the Jewish homeland (in Palestine) to be supportive of him," the Palestinian leader said.

The Khazar Kingdom, Abbas said, eventually collapsed and its subjects spread throughout Europe. Those subjects, Abbas asserted, are the Ashkenazi Jews.

"They have no relationship to Semitic culture, Abraham, Jacob and others," Abbas claimed.