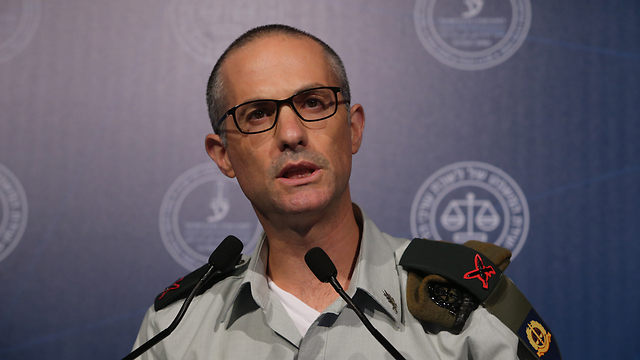 The Military Advocate General, Brig. Gen. Sharon Afek, will be promoted to the rank of major general, making him the first openly gay IDF officer to hold that rank. Defense Minister Avigdor Lieberman has decided to adopt the recommendation of IDF Chief of Staff Gadi Eisenkot to promote Afek and extend his term to five years with the option of extending it further by another year, meaning he will remain in his role until at least 2020.

The defense minister determined that the Military Advocate General, who is promoted to the rank of brigadier general upon entering office, will be promoted to major general after three years in the position.

Sharon Afek (Photo: Zvika Tishler)
"The recommendations reflect the current central and significant status of the Military Advocate General in the army, and are in line with the recommendations of the Ciechanover Commission," the IDF said. Afek led some high-profile controversial cases in recent years, including the trial of Elor Azaria, a soldier who was convicted of manslaughter and jailed after shooting dead a seriously wounded terrorist in Hebron, and the legal proceedings against Brig. Gen. (res.) Ofek Buchris, who was convicted of sexual misconduct as part of a plea deal.

"I'm certain our actions will withstand the test of time," Afek said of the Azaria trial. "Some of the public have a hard time with a case in which a combat soldier is prosecuted. In this case, while the terrorist was trying to stab soldiers, it was allowed and necessary to shoot him. But Azaria should not have shot him 11 minutes later, when he was already neutralized."

About the Buchris case, Afek said that "The IDF and the army chief's message was of zero tolerance towards any case of sexual harassment or assault, whatever the rank and status of the offender may be."

Galia Wolloch, the chairperson of women's organizing Na'amat, welcomed the decision. "I congratulate Maj. Gen. Sharon Afek for the promotion in rank. I wish we could reach the day in which news like this are not considered news. The IDF is the army of all of the people—women, men, religious, secular, straights and LGBTs. This is happy news in a time marked by less positive processes, which include attempts of exclusion and religionization aimed mostly against women. I expect the IDF chief to fight against such phenomena as part of the battle for the IDF's values," she said.