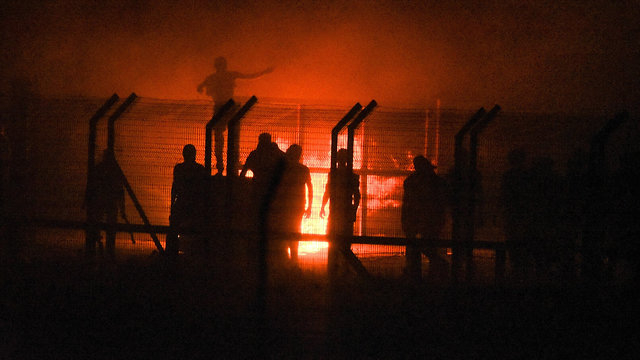 Gazans are victims of an ideology of hatred

Op-ed: Palestinian rioters, who are sending flaming kites across the border and vandalizing goods and fuel pipelines aimed at easing the Gazans’ life, couldn’t care less about the distress in the strip. On the contrary, they want to increase it, because that’s Hamas’ ideology—destruction and ruin.

Israelis, all Israelis—apart from a minority of hard-hearted people—are looking at the residents of the Gaza Strip with great sadness. It’s such a pity: An unemployment rate of 60 percent among young Gazans, a serious shortage of clean water and medications, and power supply only several hours a day.

Most Israelis would like to see Gaza blooming and thriving. Once, before the disengagement, there were plans to build the “Singapore of the Middle East.” For the first time in their short history, the Palestinians gained sovereignty, even if it was over a small territory.

It could have been a wonderful beginning. Without occupation. Without settlements. Without Israel. The crossings to Israel and Egypt were operated under agreements which the European Union was part of. Goods were flowing in. An entire world was watching them with a huge desire to help. Mohammad Dahlan, who dealt with the disengagement on behalf of the Palestinian Authority, appointed teams with 42 experts who were supposed to fulfill the Singapore dream with the World Bank’s help.

We know what happened next. Instead of Singapore, we got Afghanistan. It happened primarily because the industry of hatred overpowered the industry of prosperity. Hamas took over the strip with shocking violence, which included mass executions. The cancellation of the crossing agreements led to a siege, which Israel never wanted. But that’s exactly what Hamas wanted.

Gaza turned into a mass of oppression, distress and self-victimization. The settlements’ industrial zones turned into ruins or into jihad training camps. The strip was covered with great darkness. Once again, we learned that wherever radical Islam rears its head, the result is destruction, ruin and bloodshed. Gaza suffered the same fate. Not because of Israel, not because of Egypt, but because dark Islam provided the only thing it can provide—destruction.

Now, it’s the protests. Many of the strip’s residents know Hamas is exclusively responsible for the great darkness that has fallen upon them. But God forbid should they point an accusing finger at the ones who are really responsible for this situation. After all, those who take part in the border fence protests have become addicted to the Hamas-made industry of incitement.

In their time of need, the victims turn to the mosques, where they receive an increased dosage of incitement. There’s no need for everyone to fall for it. But there are enough incited and miserable young people who are willing to sacrifice themselves and their people for an ideology of hatred.

Both last week and this Friday, a force of those incited people made it to the Gazan side of the Kerem Shalom Crossing, the place where goods are delivered to the strip’s residents. Hamas often uses the goods for its own purposes or passes them on to its people. Nevertheless, after Egypt dealt the tunnels a critical blow, and in light of the fact that the Rafah Crossing is kept closed most of the time, the Kerem Shalom Crossing is the Gazans’ doorway for flour and fruit and vegetables and fuel. Without it, their distress will reach new heights.

The rioters, who are defined in different newspapers—sometimes in Israel too—as “innocent protestors” or “innocent civilians”—couldn’t care less about that. They aren’t seeking peace. They aren’t sending swastika kites or incendiary kites over the border in a bid to solve their distress. On the contrary, they want to increase it, because that’s the ideology of Hamas and Islamic Jihad—destruction and ruin. That’s why they set fire to the goods and fuels aimed at easing, if only a little, the Gazans’ distress.

Twice the past year, the IDF destroyed terror tunnels built under the Kerem Shalom Crossing. Why would they build them there of all places? Why hurt themselves? This is incomprehensible to a stranger. Irrationality is their logic. Because self-harm is easier to market than reconstruction and welfare and livelihood. So some Hamas members build tunnels under the Kerem Shalom Crossing, and other Hamas members work to vandalize the crossing and the goods which were supposed to reach the strip’s residents.

This is the grim reality. Nevertheless, we should offer them—even Hamas—everything. Both to lift the siege and increased aid, as well as a chance for prosperity and welfare—as long as Hamas accepts the international community’s conditions, which include demilitarization in exchange for reconstruction.

Many people in the world have trouble understanding that Hamas is the problem. A major, dramatic Israeli proposal could change the picture. Hamas would likely turn it down, but the picture would be much clearer. And because this is a battle over public opinion, an Israeli proposal is a must.