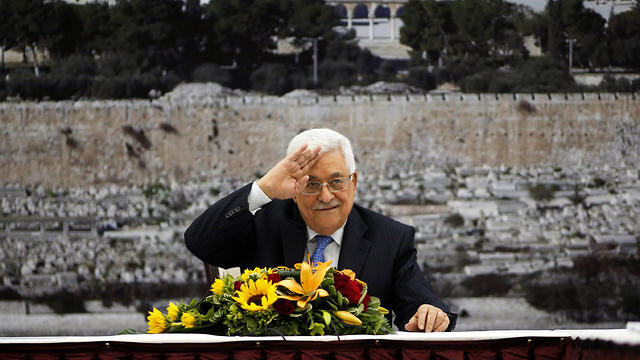 Abbas is a pain in everyone’s neck, not just Israel’s

Analysis: The Israelis are not the only ones who have had enough of the Palestinian president. The king’s palace in Saudi Arabia, the king’s palace in Jordan, President al-Sisi’s headquarters in Cairo and the Gulf emirates—none of them will shed a tear if he resigns. They’ve already realized that he has no power, no vision and no integrity.

Look at the 15 members of the allegedly new PLO Executive Committee. They didn’t have to run around the villages of the West Bank, collecting votes. In Palestinian President Mahmoud Abbas’ quid pro quo system, he rewarded a group of disciplined people, summoned them like thieves in the night between Thursday and Friday, without elections and without a vote, and sent the media a group photo.

Three Palestinian journalists insisted on informing the public that the average age of the group of dinosaurs in the Executive Committee, led by Abbas, is 70 years. The young generation isn’t represented. The rais couldn’t care less them and would rather ignore them. Only obedient people like Saeb Erekat and functionaries like Azzam al-Ahmad are rewarded. A total of 14 men and Hanan Ashrawi, who wouldn’t dream of rebelling against Abbas’ dictatorship. If anyone tries to make any demands, they will knock on his door in the wee hours of the night or kick him out. Ask Mohammad Dahlan, Salam Fayyad, Yasser Abed Rabbo and others, who were flown thousands of kilometers away at Abbas’ order.

It took Abbas five days to understand that he is jeopardizing the donor countries’ aid funds and getting in trouble with the White House and with the EU (Photo: Reuters)

Oh, we almost forgot. After the “money lenders” speech, which angered almost the entire world, we did find a young Palestinian woman in a highly regarded institution in Ramallah after all. Seventeen-year-old Ahed Tamimi, the one who slapped IDF soldiers, was selected as an honorary member of the Palestinian National Council. Another idea from Abbas’ creative mind, aimed at teasing the Israelis.

Two years ago, in this column, I called on Abbas to resign. Your time is up, I said to him, you’re no one’s partner. I received hundreds of responses, and the Arab media translated and quoted the article without a single word of reservation. More and more people understand that the other side wants him to go too. After all, Abbas has cracked the formula of the Arab world’s rulers club. You don’t walk out on a position that grants you, if you know how to exploit it, many financial benefits. Ask Tareq and Yasser Abbas, his sons.

I won’t go back to the speech or to the apology. As far as we’re concerned, there is no and there will be no forgiveness. It took Abbas five days to understand that he is jeopardizing the donor countries’ aid funds, and that he is getting in trouble with the White House and with the European Union. Meanwhile, he heard some small, cautious rebukes from the group surrounding him in the Muqata’a.

Abbas and al-Sisi. Everyone has had enough of him (Photo: AFP PHOTO/ PPO / THAER GHANEM)

I know that at least three Executive Committee members, who begged me not to disclose their names, understood the trouble he was getting them into. While Israel argues about the nuclear documents, Abbas blasts the Israelis. No one is going to meet with him.

And there is no need to explain that it wasn’t a slip of the tongue or a temper tantrum like his “may your house come to ruin” attack on US President Donald Trump. Abbas did his homework and knew who he chose to quote. He could have guessed that the Israelis would be furious. The pretend apology he was dragged into is unconvincing and will do no good.

With just a few words, he could have announced that he was cancelling the security coordination between the Palestinian Authority and Israel and presented his arguments, and the world would have woken up in his favor. Everyone would have immediately started courting him. All those who are attacking him over his horrific description of Jews sent to the gas chambers because of their despicable professions, according to his thesis, would have been alarmed by the “fauda” (chaos) that could have erupted.

But Abbas is no fool. Make no mistake. He isn’t senile either. He thinks he knows where the pressure should be exerted. It’s quite possible that that’s how he has chosen to enter the Palestinian history books, as a Holocaust denier (despite the apology).

The Israelis, however, are not the only ones who have had enough of Abbas. The king’s palace in Saudi Arabia, the king’s palace in Jordan, President Abdel Fattah al-Sisi’s headquarters in Cairo and the Gulf emirates—none of them will shed a tear if he resigns. They’ve already realized that he has no power, no vision and no integrity. He is a pain in everyone’s neck.