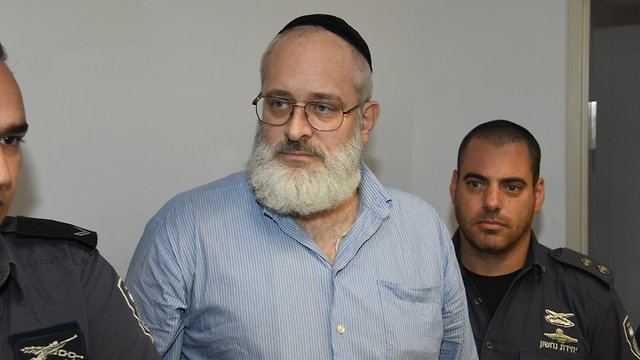 Settler gets 15 years in prison for killing Palestinian, 13 years later

Yehoshua Elitzur, Jewish convert from Germany, was convicted in 2005 of killing Sael Jabara al-Shatiya, but fled the country before the sentencing; after being caught in Brazil and extradited to Israel, court finally sentences him.

Yehoshua Elitzur, who was convicted in September 2005 of killing a Palestinian and escaped to Brazil immediately afterwards, was sentenced Wednesday to 15 years in prison.

Elitzur, a Jewish convert from Germany living on a West Bank hilltop, was convicted of killing Sael Jabara al-Shatiya, a Palestinian from the village of Salem in the northern West Bank, in September 2004.

Yehoshua Elitzur (Photo: Yair Sagi)
Elitzur was driving towards the settlement of Alon Moreh when he saw al-Shatiya heading in the opposite direction with several passengers. Elitzur then stopped his car in the middle of the road to block al-Shatiya, before alighting his vehicle carrying a fully-loaded M-16 rifle. Standing in the middle of the road, he instructed the van driver to stop. Due to the road conditions, the car could not stop, and al-Shatiya continued driving, turning right toward the shoulders of the road with the intention of stopping there. Elitzur then shot at him once, and the bullet penetrated the car window and killed al-Shatiya.

Elitzur was convicted of manslaughter in September of 2005, but he fled the country before sentencing.

Interpol issued an international arrest warrant for Elitzur, who was tracked down by the efforts of the Israeli police's international division.

He was arrested in Sao Paulo in 2015 and after being cleared for extradition by the Brazilian Supreme Court, he was put on a plane to Israel in January 2018.

The judge also noted the court had rejected Elitzur's claim that he was acting in self-defense, pointing out that "the vehicle did not turn in (Elitzur's) direction."

Elitzur upon his extradition back to Israel from Brazil (Photo: Motti Kimchi)

"In light of the unequivocal findings presented in the ruling, it is not reasonable to assume the defendant was in danger or mistakenly thought he was. We have before us a severe case of taking a human life without necessity or purpose," Gurfinkel elaborated.

"He (Elitzur) suspected anyone who isn't Jewish is a potential terrorist," the judge added.

Yasmin al-Shatiya, the Palestinian victim's blind daughter, welcomed the verdict. "I'm satisfied that my father's killer is going to prison for many years, for him to learn how precious life is," she said.

Elitzur, who was living in the settlement of Itamar at the time of the shooting, was apologetic but ultimately unrepentant. "I apologize to the family of the victim for the death of the father," he said at a past court hearing. "But I have no doubt my life was at risk. However, I do understand, from a humane point of view, that this is a great loss for the family. This is a very dangerous place and many things can happen there."