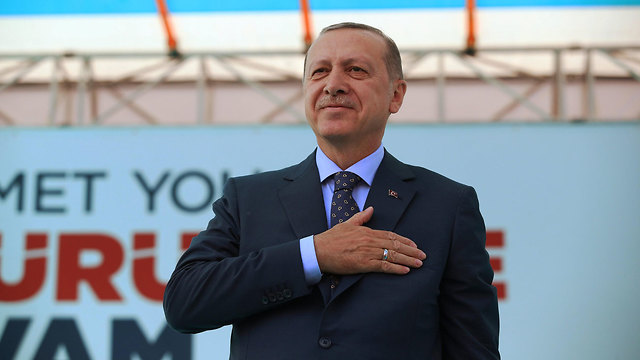 The Turkish leader also criticized US President Donald Trump’s decision to withdraw from the nuclear agreement with Iran.

Last week, Erdogan told CNN that the US embassy move to Jerusalem was a “huge mistake.” He repeated his claim that “east Jerusalem is the capital of Palestine” and that one day, “when a Palestinian state will be established,” a Turkish embassy will open there.

According to the Turkish president, the move further isolates the US diplomatically. He said that with its recognition of Jerusalem as Israel’s capital, the US stands to “lose allies.”

Speaking to members of his AKP party, Erdogan said: “Have you heard those criticizing us for our actions in Afrin (Kurdish Syria) condemn the massacre in Gaza yesterday?” He was referring to Turkey’s war against the YPG Kurdish militants whom Ankara views as terrorists. The YPG forces fight alongside the United States against the Islamic State.

In early April, Erdogan harshly criticized Israel after events in Gaza lead to the deaths of 16 Palestinians, referring to it as an “inhumane attack.”

Prime Minister Benjamin Netanyahu responded on Twitter: “The most moral army in the world will not accept moral preaching from someone who for years has been bombing a civilian population indiscriminately. That’s apparently how Ankara marks April Fool’s Day.” Netanyahu was apparently referring to ongoing battle against the Kurds.

Erdogan told supporters in the province of Adana in response: “We don’t have the shame of invading on us, Netanyahu. You are an invader and right now are present in those lands as an invader. At the same time, you are a terrorist.

“He says our soldiers are oppressing people in Afrin. Netanyahu, you are very weak, very poor. We (Turkey) are dealing with terrorists. But you are not concerned about terrorists because you are a terror state,” Erdogan said at the time.