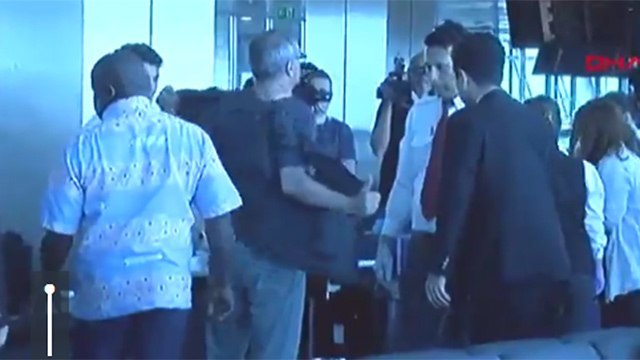 Israel's envoy to Turkey sure humiliation was ordered 'from above'

Eitan Na'eh tells close associates Turkish authorities were instructed to publicly humiliate him and his wife with meticulous security checks prior to their expulsion from the country amid rocketing tensions between Jerusalem and Ankara.

Israel's Ambassador to Ankara Eitan Na'eh, who was expelled on the orders of Turkish President Recep Tayyip Erdoğan, says that a humiliating security screening he was forced to undergo in front of media cameras at the Istanbul International Airport on Wednesday was “ordered from above.”

According to Na’eh, who was booted from the country following deadly clashes between IDF soldiers and Gazan protesters, Turkish authorities were not content with his mere expulsion, and were determined instead to humiliate him in the wake of the violent unrest which claimed dozens of Gazan lives.

“They didn’t humiliate only me, but also the State of Israel—and the order came from above,” Na’eh said after photographers and journalists were invited in advance to cover the degrading security screenings to which he was subjected prior to his departure.

Na’eh—who after six years without official representation in Ankara, took up the post of Israel’s ambassador to Turkey in 2016—was filmed Wednesday removing his jacket and shoes at the request of security personnel. Na'eh and his wife were also frisked by a Turkish security guard.

Despite being forbidden by the Israeli Foreign Ministry to give interviews, Na’eh shared with close associates in private conversations the extent of the public debasement.

“I didn’t care if they checked me. That’s legitimate. But why bring in journalists to a restricted zone? I asked the security personnel to remove the journalists from there but they said they can’t. Photographers stood there and documented how I and my wife opened up our suitcases containing our personal belongings. That is something which is not done,” he said.

It was the latest blow in the recent diplomatic crisis between Israel and Turkey, which started with Erdoğan's decision to recall the ambassadors to the US and to Israel in the wake of the opening of the American Embassy in Jerusalem and Israel's handling of the Gaza border riots, which exacted a high death toll.

Erdoğan then decided to expel Na'eh, with Israel responding to the move by asking the Turkish Consul in Jerusalem, Hüsnü Gürcan Türkoğlu, to leave the country.

This led the Turkish Foreign Ministry to summon Israel's Consul-General in Istanbul, Yosef Levi Sfari, and ask him to leave the country until further notice.

Erdoğan has been very vocal in his criticism of the Israeli handling of the rioting on the Gaza border, during which mostly young Palestinians encouraged by Hamas attempted to breach the border fence and enter Israel in what has been dubbed the "Great March of Return."

The escalating tensions were further fuelled by a verbal tit-for-tat exchange between Erdoğan and Prime Minister Benjamin Netanyahu.