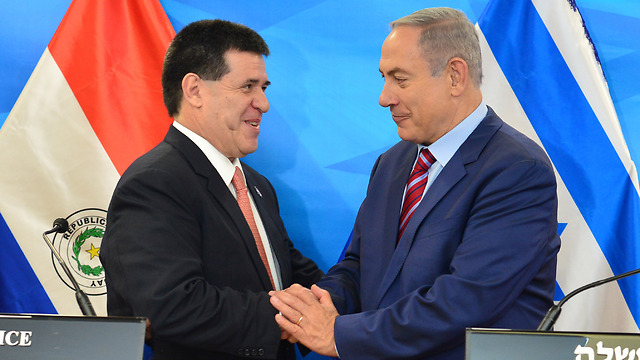 Outgoing President Horacio Cartes will open new embassy in the Israeli capital on Tuesday, following in footsteps of the US and Guatemala; Cartes vowed to move embassy before leaving office on Aug 15, president-elect Mario Abdo Benitez said wasn't consulted on matter.

Paraguay’s President Horacio Cartes will open the country’s new embassy to Israel in Jerusalem on Tuesday, following similar steps by the United States and Guatemala.

Government spokesman Mariano Mercado said Cartes will leave for the trip to Israel on Saturday.

The decision to move the embassy to Jerusalem has been controversial in Paraguay.

The Paraguayan president surprised attendees with the announcement at an event celebrating Israel's 70th Independence Day in Asunción. Among the invitees were Israel's Ambassador to Paraguay Ze'ev Harel, Cartes' successor Mario Abdo Benitez, the vice president-elect Hugo Velazquez, the country's foreign minister and other dignitaries.

Israel claims the entire city as its eternal capital. Palestinians want east Jerusalem as their future capital and were infuriated by the embassy moves. Most countries maintain embassies in Tel Aviv and have balked at moving them until the international legal status of the city has been resolved.