The bunker, under construction 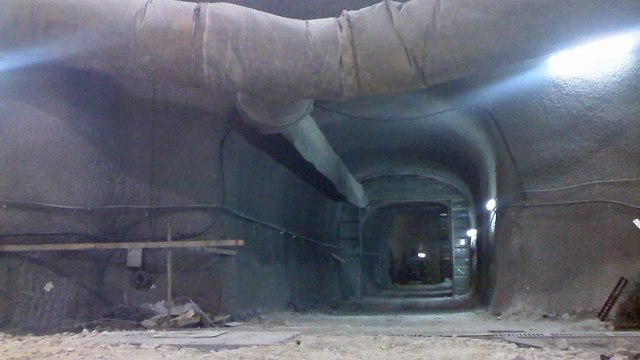 PM Netanyahu orders Security Cabinet to meet at underground bunker until further notice for security purposes; order given amid increased tensions with Iran.

Israel’s Security Cabinet, a forum of senior ministers headed by Prime Minister Benjamin Netanyahu, has begun holding its weekly meetings in a secure underground bunker in Jerusalem, it was revealed Tuesday.

The facility, known as the “National Management Centre”, was first used by the Security Cabinet in 2011 to rehearse a national crisis scenario. It was carved out beneath the government complex in Jerusalem and includes living quarters as well as command facilities.

The bunker at the time of its construction
Reports of the move come amid a rise in tensions with Iran. Israel this month accused Iran of firing rockets from Syria into the Israeli Golan Heights. Israel struck back with its heaviest air strikes in Syria since the start of the Syrian civil war in 2011. Meetings of the Council, hitherto mostly at the prime minister’s office in Jerusalem, are already generally held out of the public eye. “Cabinet ministers have told us that one of the main reasons for the move is Netanyahu’s wish to try even harder to prevent leaks and because of fears of spying attempts by hostile foreign parties,” Channel 10 said.
Syrian antiaircraft fire against Israeli missiles
X

The group of 11 ministers has already held a small number of meetings at the facility, and three planned weekly sessions, the next of which is scheduled for Wednesday, will be held in the bunker, a media source said.