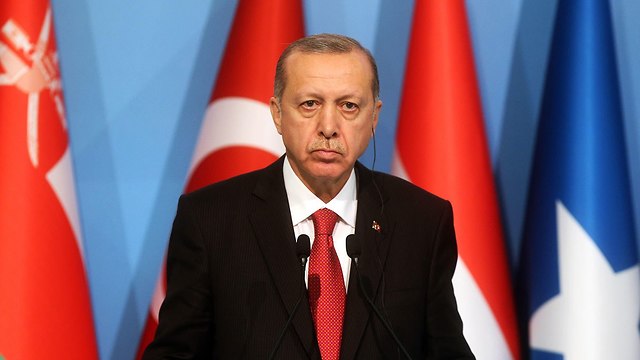 Organization of Islamic Cooperation calls for international force to be deployed to protect Palestinians in Gaza and urges UN to investigate killings on strip's border; 'Children of those subjected to torture in concentration camps are now attacking Palestinians with methods that would put Nazis to shame,' Turkish president charges.

"The children of those being subject to all sorts of torture in concentration camps during World War Two are now attacking Palestinians with methods that would put Nazis to shame," Erdoğan said shortly after addressing a rally of thousands of people in support of Palestinians.

The international community "must stop watching the massacres from the bleachers" and send "an international peace force to the people of Palestine, who are losing their young children to Israeli terror every day," Erdoğan said, comparing the proposed deployment to peacekeeping forces sent to Bosnia and Kosovo in the 1990s.

Erdoğan also urged member states and others to prevent Israeli products produced in "illegal Israeli settlements" from entering their markets.

The Turkish president's calls were backed by Muslim leaders, who on Friday urged an international force to be deployed to protect Palestinians after dozens of protesters were shot dead by Israeli forces on the Gaza border this week.

At a special summit in Turkey convened by Erdoğan, they also pledged to take "appropriate political (and) economic measures" against countries that followed the United States in moving their Israel embassies to contested Jerusalem from Tel Aviv, a move they described as a "provocation and hostility against" the Islamic world.

Erdoğan, who is campaigning for re-election next month, used the summit to verbally attack Israel.

He also castigated the United States, saying its decision to move its embassy had emboldened Israel to put down the protests at the border with Gaza with excessive force. Most countries say the status of Jerusalem - a sacred city to Jews, Muslims and Christians - should be determined in a final peace settlement between Israel and Palestinians and that moving their embassies now would prejudge any such deal. US President Donald Trump's step to recognize Jerusalem as Israel's capital and move the embassy there reversed decades of US policy, upsetting the Arab world and Western allies.

Guatemala this week became the second country to move its embassy to Jerusalem, and Paraguay said it would follow suit this month.

Erdoğan speaking at the Organization of Islamic Cooperation meeting (Photo: Reuters)
The final declaration of the meeting of the 57-member Organization of Islamic Cooperation described the killing of 60 Palestinians, protesting the embassy move on Monday, as "savage crimes committed by the Israeli forces with the backing of the US administration." It said the violence should be put on the agenda of the UN Security Council and General Assembly, and called on the United Nations to investigate the killings.

The Islamic organization also told its members to fall in line and "commit to voting for our common cause" of Jerusalem or risk punitive measures. Turkey's foreign minister had criticized certain members for voting against, abstaining from or not showing up for a United Nations motion in December - some 128 countries overwhelmingly supported the UN against Washington's decision to recognize Jerusalem as Israel's capital.

The summit was attended by Jordan's King Abdullah, a US ally whose Hashemite dynasty is custodian of Muslim sites in Jerusalem. Abdullah said the US decision five months ago to recognize Jerusalem as Israel's capital had "weakened the pillars of peace ... and deepened the despair that leads to violence."

Iran's President Hassan Rouhani called the Trump administration a "dangerous threat" to global peace and security and urged Muslim countries "to totally cut their relations with the Zionist regime (Israel) and also to revise their trade and economic ties with America."

"If Israel faces a united front of Islamic nations, it will never be able to continue its crimes," the Iranian president said. He cited the example of the "new and young generation of Palestine who is aware of their rights and has no intention to withdraw or compromise."

Palestinian Prime Minister Rami Hamdallah criticized the US for becoming "part of the problem and not the solution" and thereby disqualified itself as a peace process mediator by infringing on the Palestinians' "historic, legal, natural and national rights" with Monday's embassy move.

Before the summit, Erdoğan slammed Islamic countries that failed what he termed "the Jerusalem test," saying "all we Muslims do is condemn" and not unite. Erdogan said Muslim countries were "severe, intolerant and unconscientious" to each other and "toothless and cowardly" to unspecified enemies. He later struck a more conciliatory tone.

Protest in Istanbul against Israel

Erdoğan, along with the Palestinian prime minister, was speaking to hundreds of thousands waving Palestinian and Turkish flags at an Istanbul rally dubbed "Curse Oppression, Support Jerusalem." He told the rally that the responsibility to defend Jerusalem lay with them as crowds chanted "Chief, take us to Jerusalem."

A populist with roots in political Islam, Turkish Erdoğan has described Israel as "terrorist state."

The violence in Gaza led to Turkey and Israel expelling each other's senior diplomats this week. Erdoğan has also traded barbs on Twitter with Prime Minister Benjamin Netanyahu. Israel, however, was the 10th-largest market for Turkish exports in 2017, buying some $3.4 billion of goods, according to IMF statistics.

"We have excellent economic ties with Turkey. And these relations are very important for both sides," Finance Minister Moshe Kahlon told Israel Radio on Friday when asked if Israel should break ties with Turkey.

The plight of Palestinians resonates with many Turks, particularly the nationalist and religious voters who form the base of support for Erdoğan, who has been in power for 15 years.