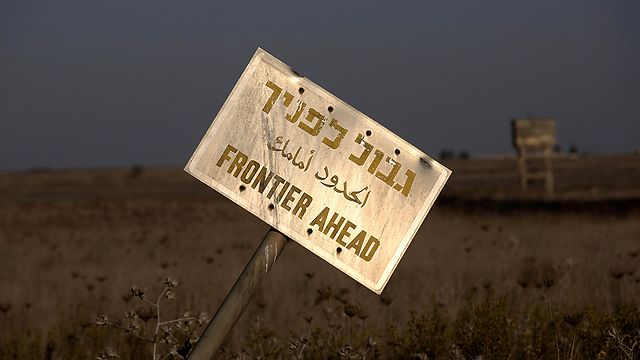 An invitation to an unquiet border

Analysis: If the Americans pull out of Syria in 2019, any Israeli agreement with the Russians about the Golan Heights will be worthless. The really important agreement is between Israel and the US on keeping American forces in Syria.

World powers, with Russia leading one side and the United States heading the other, are trying, along with countries in the region, to formulate a diplomatic agreement on the following question: Who will control southwestern Syria? In other words, the Golan Heights area and the areas along the Jordanian border.

Israel is likely involved in such discussions behind the scenes, as it has been in the past. As far as we are concerned, this is an existential strategic question: Who will be our neighbors in the Golan Heights, what agreements will we have with them and what guarantees will we be given to implement them.

The Russians are pressuring Israel to “finalize a deal.” President Vladimir Putin strokes Prime Minister Benjamin Netanyahu's ego, inviting him to Moscow and whispering flattery in his ear about Russia’s interest in removing all the foreign forces from Syria, including the Iranians.

Putin finalizes the diplomatic principles with Netanyahu, and Shoygu finalizes the military details around the Syrian army’s return to the Golan Heights with Lieberman. The Russians know that the Israeli leaders’ internal needs are more important to them than anything else, which is why they have been exteriorizing their sympathy for the Israeli issue in recent weeks. That’s what people refer to as a bear hug. Just like they hugged the Iranians about a month ago and we exploded, they are hugging us now.

The Russian attitude towards the agreement was expressed very well by Russian Ambassador to the United Nations Vassily Nebenzia. In response to a journalist’s question, he said he understood that an agreement had been reached with Israel about the Golan Heights, but he didn’t know when it would be implemented.

As far as the Russians are concerned, it’s just one more diplomatic-regional agreement and its details don’t really matter. They don’t care if the Iranians withdraw 20 or 70 kilometers from the Golan Heights. Israel won’t get in Syrian President Bashar Assad's way, and that’s what counts. As far as Israel is concerned, it’s an existential matter. The 1974 Agreement on Disengagement brought calm to the border for nearly four decades.

When Lieberman and his team met Shoygu, they were presented with the Russian plan for the Syrian army’s deployment in the Golan Heights: The Iranians and Hezbollah would pull out of the Quneitra and Daraa areas, and the Syrian army would only be accompanied by Russian experts and military police who would supervise the lull.

This is indeed a dramatic Israeli diplomatic achievement, which was reached following the pressure Putin exerted on Assad during their meeting in Sochi on May 17. But there is another side to the equation. The Iranians and Assad have reached the following agreement with the Russians: We won’t get in your way in southern Syria, as long as the Iranian interests in all of Syria are maintained. This basically means that Iran remains in Syria, contradicting Netanyahu's statement that Israel won’t accept any Iranian military presence in Syria.

It’s easy for the Iranians to make a temporary concession in the Golan Heights, as their attention has now been diverted to Iraq. The possibility of an anti-Iranian government being created in Iraq could jeopardize the Revolutionary Guards’ main strategy: Establishing the “Shiite arc” which begins in Iran, passes through Iraq and ends in Syria and Lebanon. Quds Force commander Qassem Suleimani is now in Iraq, trying to rebuild the alliance with the pro-Iranian factions there. Otherwise, the Iranian sphere of influence in Syria and Lebanon will suffer.

The Golan Heights issue emerged on the backdrop of the Russian-Syrian attempt to destroy the two remaining pockets of rebels: In northern Syria, in the Idlib district, and in the south, in the Daraa and Quneitra districts.

In the northern pocket, the Turks have occupied 11 percent of the Syrian territory, built 14 large bases, stationed two divisions and have no intention of moving. For that reason, it is more convenient for the Syrians to handle the southern pocket at this time. But in order to receive the area on a platter, they need an American and Israeli agreement.

The Americans are demanding the implementation of an agreement signed in July 2017 with the Russians and Jordanians, which states that there will be no military moves in the region in order to prevent a situation in which Jordan will be flooded by refugees. Israel wants the ceasefire agreements, the UN’s return to the Golan Heights and a commitment that there will be no Iranians or Hezbollah members there.

If the Americans pull out of Syria in 2019, any Israeli signature on an agreement with the Russians about the Golan Heights will be on ice, as no one—especially not the UN—will guarantee that it will be maintained over time. The really important agreement, therefore, is between Israel and the US on keeping American forces in Syria. If the Americans are not there next year, the Syrian army’s arrival in the Golan Heights, under the current conditions, is an invitation to an unquiet border.