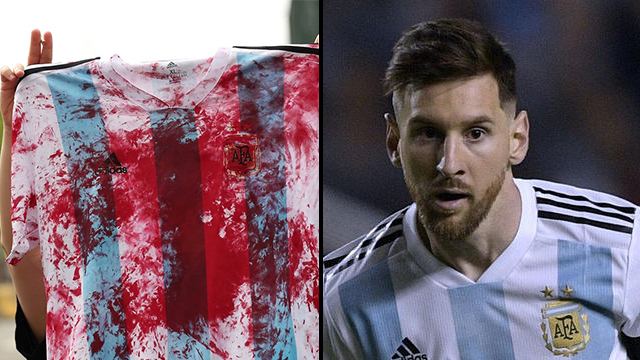 The Israeli politicians who are helping the boycott campaign

Op-ed: Part of the Israeli Right is supplying the industry of hatred against Israel with ammunition. The cancellation of the Argentina match is the highlight, but it won’t end here. Because when they have to choose between the state’s best interest and themselves, some right-wing MKs will continue promoting self-serving initiatives. And to hell with the state.

Jibril Rajoub, the man who announced that if he had an atom bomb he would drop it on Israel, won a huge victory, because the game against Argentina was supposed to be the jewel in the crown. It was supposed to join the Eurovision win in proving that Israel doesn’t have to give a damn about the rest of the world. But no, it does.

We must admit that Rajoub is not the only one who defeated Israel. Israel defeated itself. Because when you do things to spite other, you end up paying the price. And we’re paying it.

Messi and a blood-stained Argentina jersey. It’s terrorism for all intents and purposes (Photo: AFP)

Culture and Sports Minister Miri Regev says it’s not the boycott campaign, but the threats on Argentina’s big star, Lionel Messi. She’s right. It’s terrorism for all intents and purposes. Rajoub is playing a double role here. He’s both an unrestrained bully and a propogandist and instigator working at the boycott movement’s service. After all, the threats on Messi came from Rajoub himself.

But what’s new? The BDS has always been a form of intellectual terrorism intimidating almost everyone who wants to come to Israel. And it has been used for many years, also against Israelis who try to open their mouths on Western campuses. But that’s the thing. Because as the foolishness of Israel’s actions grows, the boycott terror is more successful. Every announcement about another settlement construction plan pushes more young people, including Jews, to support the boycott.

One of the most harmful laws, which popped up for another round at the Knesset on Wednesday, is the Law for Prevention of Damage to State of Israel through Boycott, which was enacted in 2011. It didn’t do any good and failed to deter anyone. Not only are the boycott supporters still calling for a boycott, ignoring the law, the legislation itself has strengthened the boycott supporters.

So who needs laws that are not only unhelpful, but mainly harmful? Politicians. Not everyone. A few of the Right’s Knesset members suffer from the feeling that some right-wing voters, at least the Likud members, are “a bunch of animals” who they have to constantly feed with food to gain their support.

These politicians couldn’t care less about the national interest. The only thing they care about is a dubious political achievement. They truly believe it will help them in the upcoming primary elections. They’re wrong. Most Likud members are sane people. They’re not animals. But their Knesset members think otherwise.

The Knesset. Some politicians couldn’t care less about the national interest (Photo: Reuters)

On the exact day that the anti-Israel boycott scored a major victory, an amendment to the boycott law was put up for discussion at the Knesset once again, to facilitate compensation without proof of damage. The High Court of Justice, might I remind you, rejected petitions against the boycott law in the past, but struck down an article allowing compensation without proof of damage. So why is there a need to discuss an amendment that has already been struck down? It’s not going to change anything. A law that hasn’t deterred anyone without the amendment won’t deter anyone with the amendment. But the amendment’s initiators think it will help them.

But the boycott, we must admit, is not only a product of the industry of lies. It’s also a product of self-made moves. Part of the Israeli Right has become a supplier of ammunition to the industry of hatred against Israel. The cancellation of the Argentine team’s match in Israel is the highlight.

But it won’t end here. Because when they have to choose between the state’s best interest and themselves, right-wing politicians will continue promoting self-serving initiatives. And to hell with the state.